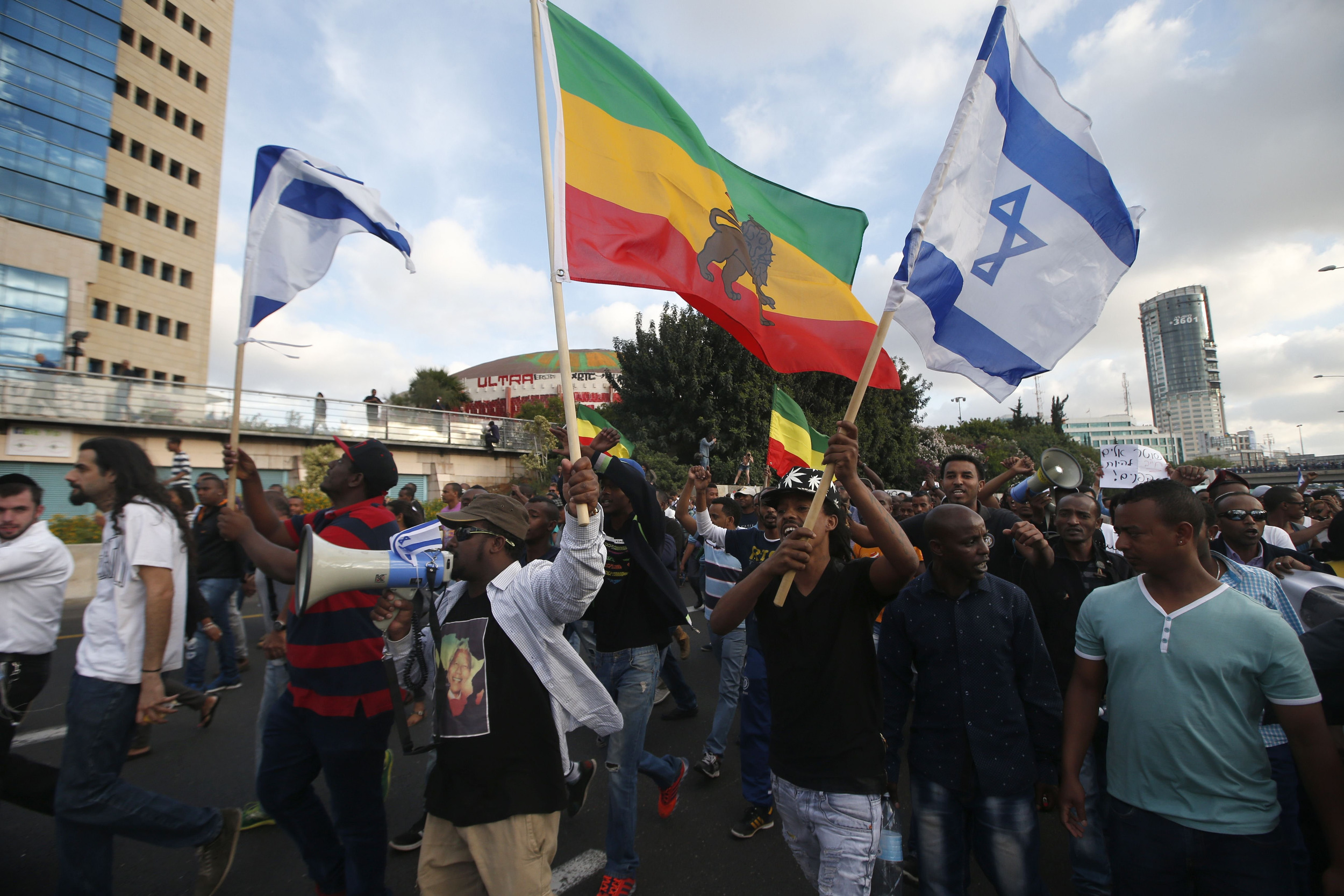 Police in Israel charged at hundreds of ethnic Ethiopian Israelis in central Tel Aviv on Sunday as an anti-racism demonstration developed into one of the most violent rallies to rock the country’s financial capital in years.

The protest, which consisted of several thousand members from Israel’s Jewish Ethiopian minority, took to the streets to demonstrate against what they say is police brutality after a video clip surfaced last week showing policemen beating and punching an Ethiopian-Israeli soldier.

Protesters overturned a police car, damaged several properties, and hurled bottles and rocks at riot gear clad officers at Rabin Square at the heart of the city. Tensions defused after midnight, but police have stated that they would be far less tolerant of similar demonstrations should they reoccur. The protest saw 56 officers and 12 protesters injured, some requiring hospital treatment, according to a police and an ambulance official.

According to a police and an ambulance official, the protest saw 56 officers and 12 protesters injured, some requiring hospital treatment. 43 people were arrested as a result of the protest.

One unidentified female demonstrator told Israel’s Channel 2 “I’ve had enough of this behavior by the police. I just don’t trust them anymore… When I see the police I spit on the ground.”

“Our parents were humiliated for years. We are not prepared to wait any longer to be recognized as equal citizens. It may take a few months, but it will happen,” said another demonstrator to Channel 10.

Israel is home to 135,500 Ethiopian Jews, many of whom were secretly airlifted into the country in 1984 and 1990 after a rabbinical ruling stated that they were direct descendants of the biblical Jewish Dan tribe. Nevertheless, their integration into Israeli society proved difficult as members of the community complained about racism, lack of opportunities, endemic poverty, and constant police harassment.

Since the video emerged, two officers have been suspended for using excessive force. Israeli politicians, who have been stung by comparisons made by community leaders to police violence against blacks in the United States, have tried to ease tensions.

Public Security Minister Yitzhak Aharonovich told Channel 2 the police officers caught in the footage, whom he called “a disgrace”, are currently under investigation. He added that Israel’s police force “needs to examine itself” and more needs to be done to assist the Ethiopian community.

Israeli Prime Minister Benjamin Netanyahu called for calm and said he would meet Ethiopian activists and the soldier involved in the footage on Monday.

“All claims will be looked into, but there is no place for violence and such disturbances,” he said.

Despite peaceful intentions, some protest organizers told Israeli media that sections of the crowd were incited to violence.

Police, on the other hand, said the organizers had lost control of the demonstration. Police Chief Yohanan Danino told Channel 10 that “the use of violence by a small minority of the many protesters does not serve their struggle… whoever harms police or civilians will be brought to justice.”

Ethiopian Jews have largely been accepted into the ranks of legislators and the office corps in the country’s diverse military, but according to official figures, the community still lags behind other Israelis.

Ethiopian families tend to earn 35 percent less than the national average and only half the youth receive high school diplomas compared to 65 percent for the rest of the population.