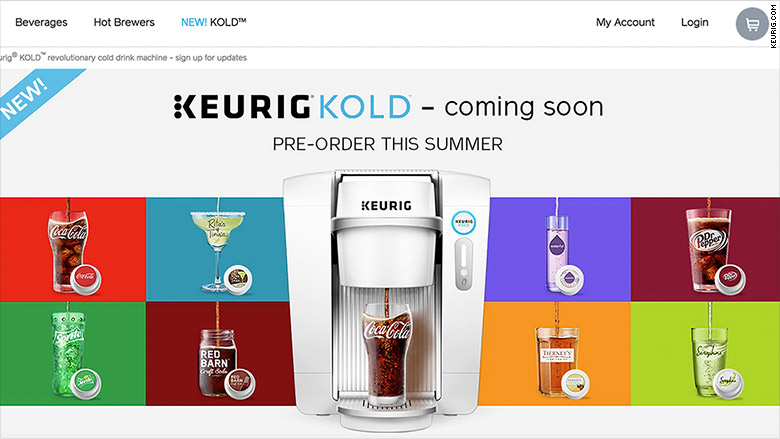 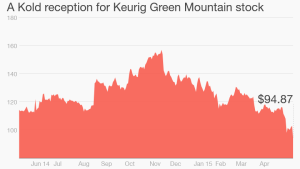 The make-your-own-cola idea seems to be fading, with SodaStream stock falling due to horrible sales, and this makes Keurig look very late to the game, so now investors are worreid Keurig Kold might be a huge flop. Shares of Keurig dropped 8 percent to a 52-week low on the Kold news, and it is actually down 30 percent on the year. In 2014, Keurig was one of the hottest stocks of the year, with November it being at an all-time high, but now the company is really falling behind. Keurig added Kraft to the K-cup partnership in August, meanwhile Coca-Cola agreed to by 16 percent stake in the company last year. Consumers and investors both have seemed to fallen off the Keurig bandwagon in the past several months, and now an overpriced make-your-own-cola machine seems like it is moving the company in the wrong direction.

Investors are also worried because if you buy the Keurig Kold, you will also need to purchase the pods to go with it, which are $.99 to $1.29 each. You can buy 2-liters of Coke or Pepsi for less than what it will cost to buy the pods, and there is really no advantage to making your own soda, because it doesn’t even taste nearly as good as the real thing. The only advantage that Keurig Kold has over SodaStream is that you won’t have to purchase the carbon dioxide canisters, although the company claims it is way better than SodaStream for even more reasons than just that.

It will be hard to get investors and consumers to hop onto the expensive Kold machine, since people are already outraged about the 2.0 coffee maker. Keurig made it so that you could only use the licensed K-Cups with the Keurig 2.0, which means you cannot use the private cheaper pods in the new coffee machine, and this has angered a lot of the fanbase that used to be in love with Keurig. You can hack into the 2.0 model to use the other pods, but because consumers had to figure a workaround to the company’s greed, the damage in terms of consumer confidence has already been done.

Keurig reported that first quarter sales were very weak, with CEO Brian Kelley admitting that the company was wrong to limit the K-Cups in the 2.0 model. Since the outcry from consumers, Keurig agreed to bring back the My K-Cup reusable pods that were discontinued a while ago, and Kelley also admitted the price of the 2.0 model was too high considering you can only use licensed pods. However, it makes no sense that if Kelley was really serious about trying to get the consumers back, that the company would then price the make-your-own-cola machine at over 4 times the price of the SodaStream. Kelley said that the Kold machine is way better than the SodaStream, with new technology integrated into the make-your-own-cola machine that SodaStream does not offer.

The thing is, when your company is really looking greedy and desperate as far as trying to milk consumers for as much money as possible, investors are worried the Kold is going to be nothing more than a huge flop. Even though Keurig has the big cola companies like Coke behind them in partnership, it seems like there is nothing that really has been brought up to get consumers to put down $300 on a soda machine. If Keurig wants to get investors and consumers back, then it would seem that it needs to come out with why people should buy this product, and why this product is so much better than SodaSteam or how it is better than regular pop like Coke. For now, investors believe Kold is going to flop, and they are already showing their concern by nosediving the stocks even lower than they were a couple months ago.