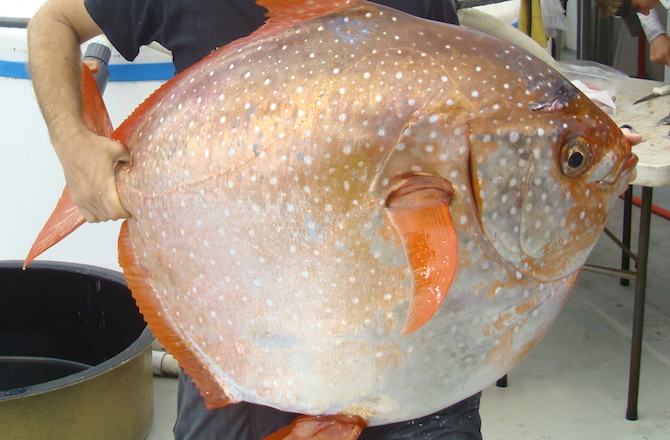 The moonfish, which is also known as the opah, is the first warm-blooded fish that has been found, according to a new study that has been published in the journal Science. The moonfish are high performance predators that have very good vision, quick reactions, quick swim speeds, and also have high stamina. Since researchers have finally been able to reach the conclusion that the moonfish is the first warm-blooded fish, it helps explain some of the great qualities of this creature. Since this fish has a very warm body, it ends up being one of the most active predators out there in the water, and it is not sluggish like other fish in the cold waters. 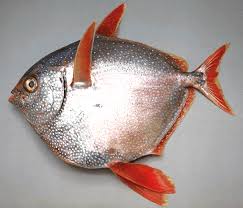 Owyn Snodgrass had collected samples of the gill tissue on an opah, which led to colleague Nicholas Wegner becoming interested in the fish, and Wegner is the lead author of the new study. Wenger is a fisheries biologist as NOAA Fisheries’ Southwest Fisheries Science Center. Wegner noted how the tissue of the opah had blood vessels, which help carry the warm blood into the gills of the fish. The blood vessels would end up carrying cold blood back to the core of the body after absorbing the oxygen from the water, which is called a counter-current heat exchange. The warm blood will leave the body core of the fish, which then helps the cold blood that is returning from the gills where oxygen is absorbed heat back up.

You might have never heard of the opah before, since it lives about 1,000 feet below the surface of the ocean, which means it is very cold and dark down there, and that has hindered scientists ability to discover the first warm-blood fish until now. The opah flaps its fins in order to generate body heat, but the flapping of the fins also helps the metabolism of the fish increase, as well as helps increase reaction time and movement. The body temperature of an opah is about 41 degrees Fahrenheit more than the surrounding water, which is huge considering that the fish lives in a cold environment all of the time. Wegner said that the gills of an opah are so different from other fish, and that this was the first time something like counter-current heat exchange has been discovered in the gills.

While a lot of other fish have minimal areas where there is warm blood running through, such as the tuna fish, this is the first time that a fish has been studied and showed to be completely warm-blooded. Since this is the first warm-blooded fish to have been found, researchers are hoping that it will help step up efforts to save these fish from becoming seafood. Opah are usually caught off the coast of Hawaii and are popular in the seafood markets, but since we know now that opah are a one-of-a-kind fish, the goal is to get them off of our plates, and keep them in the environment they inhabit. It is important that we keep this fish healthy due to it being so unique, and it likely plays a huge role in the ecosystem underwater. Researchers also want to begin learning more about this fish, since it officially is the first and only known warm-blooded fish out there. This is a huge scientific breakthrough because it’s likely there are more fish in the ocean that are warm-blooded 100 percent, and this could help lead to more discoveries of other species of fish.