Uber drivers upset by a plan proposal blocked off a small section of Beaver Street Thursday morning, as they protested for a new rule that could end up hurting the company and them.

The protest was not a surprise, they’ve known about TLC and its plan for quite some time now.

Outside the TLC headquarters, drivers from the popular taxi company stood there wearing black shirts and black posters with the company’s name. Protestors made a circle and chanted in favor of the service for a while.

But at the hearing taking place in the TLC headquarters, drivers were quiet and heard about the changes TLC wants. TLC’s Assistant General Counsel, Ryan Wanttaja, presented the plans for the popular applications. Uber is not the only one affected, other ride sharing apps like Gett, Via and Lyft also face changes. The plan has yet to be voted on and addresses some of the TLC’s worries. Among them are passenger safety, transparency, accessibility, and accountability for all dispatchers. 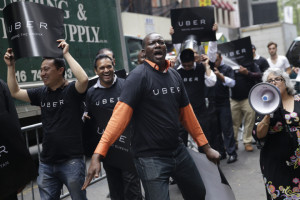 A user by the name of Mr. Wanttaja said this app is extremely popular in New York and it is used all over the area. “What the TLC doesn’t know if what level these 76 app companies comply with our rules and what protections they offer passengers,” Wanttaja said.

If TLC’s plan goes their way and it is approved, drivers will be required to file data security and privacy policies with them. It will also give passengers a clear display of rates and fares, among other things. They will also have the power to suspend or even revoke a driver’s license.

With the proposed plan and its rules, drivers using these apps will have a hard time cancelling trips, which could be the biggest reason why they went to protest to the TLC headquarters. They say some of the drivers cancel trips without a legitimate reason and this was mentioned a few times at the hearing. If approved, the TLC will investigate complaints made by users and will determine if the reason for the cancellation was legitimate or not. They also want the ride sharing apps to provide service for the users on wheelchairs.

Another change is the airport pickup, but details have not been revealed. But rumors say they will designate rules that might prevent from waiting for dispatches. Port Authority has said in the past that these vehicles obstruct airport circulation.

Uber’s New York Senior Manager for Public Policy, Michael Allegretti, was at the hearing and testified. He had a lot to say about the plan and its unwanted changes. He says Uber already follows the things they’re highlighting and that they ensure that their drivers follow the rules. He says this plan could end up affecting thousands of drivers. “Will you, the TLC, set the global standard for embracing the future, or undermine that progress by unfairly targeting transportation innovation?” he asked.

The plan already has support from the City Council’s transportation chairman, Ydanis Rodriguez. He believes the TLC is taking a step towards more “transparent” and “fair” for-hire industry.

Most of the Uber drivers believe that if the plan is approved, it would be nearly impossible to cancel a trip. One of them is driver Randolph Fable, who has been with Uber for almost a year, and is worried about the proposal. “I think it will hurt us. Customers will have to think twice before they order a job. Sometimes, you want a car and you’re in a hurry, and you order a job,” Mr. Fable said. “Now, I’m coming to pick you up. But, when I get there, you have to cancel because of an emergency. So, why shouldn’t we be able to cancel a customer job if they don’t want us?”

Have you ever used Uber? If so, how is the service? Who is right in all of this?