A masterpiece done by Pablo Picasso, painted as a tribute to his friend and competitor Henri Matisse after his death, is predicted to set a new world record for an artwork sold at auction in New York on Monday evening.

Known as the most important painting that the Spanish artist has ever done, Les femmes d’Alger, has captured all the attention in a packed pre-sale global tour in London, Manhattan and Hong Kong.

The beautiful and popular piece is expected to shatter the current auction record, which is $142 million for a Francis Bacon triptych at Christie’s New York two years ago. The event will take place in the same auction room in Rockefeller Centre.

Christie’s has estimated the piece will get around $140 million which, with the commission added, would already break the world record for Bacon’s painting of his friend Lucian Freud.

The estimates do not include the standard commission of about 12 percent, which means that the final price will be even higher. It would bring around $15 million more if sold for the Christie’s estimate. The current record holder sold for a whopping $142.4 million including commission.

Some of these rare and pricey artworks have exchanged hands on the private market, but the amounts have never been revealed to the public. 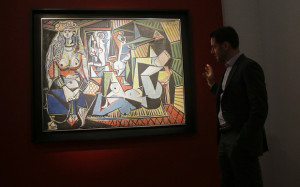 The current market is ideal too, with records falling regularly over these pieces. The work is one of a kind and carries Picasso’s popularity with it, only making it more desired among the bidders. Some say that the painting will surpass estimates and sell for an even higher amount.

When the sale is done, we probably won’t get a name or details on where the painting will go. Most of the bidders decide to remain anonymous when they buy an expensive piece.

The bidding will probably feature people from China, who have been shelling out money recently for these art pieces. Their class of super rich citizens will probably look to obtain the piece at the estimated amount or even more if the bid goes long distance.

The New York art world was taken by surprise when a mystery Chinese-speaker in jeans and a hooded jacket won the bidding at Sotheby’s for Vincent van Gogh’s L’Allee des Alyscamps for $66 million.

The current owner of the famous piece is selling the work anonymously, 18 years after bidding and acquiring it at an auction done by two popular collectors, Victor and Sally Ganz.

Even though the owner has remained anonymous, his piece has been gathering the attention of crowds in various exhibitions, most recently in the Picasso show at Tate Britain three years ago.

The legendary artist painted 15 variations of this art piece, but none are as valuable as this one. Picasso decided to paint it in honor of his lost friend and competitor Matisse, who died in 1954.

“In my 10 years at Christie’s no sale has attracted so many of our top clients or so much excitement,” Brooke Lampley, the head of Impressionist and Modern Art, told The Telegraph.

“There is an incredible thirst in the market right now for top-quality works by renowned artists. Pablo Picasso is the most highly recognised figure in the art world today and this piece is in many ways the culmination of his career.”

Jussi Pylkkanen, who will be in charge of auctioning the piece at the event, believes the bidders won’t waste any time going for it. “From the auctioneer’s rostrum it has become clear that the many new global collectors chasing masterpieces have been waiting for an iconic Picasso to appear on the market,” he said. “None is more iconic than Les femmes d’Alger.”

The record by a Picasso piece is $106.5 million, set at Christie’s in 2010. That amount will probably be topped Monday. The painting is not the only attraction of the show. An Alberto Giacometti’s whippet-thin bronze L’homme au doigt (Pointing Man) has been estimated at $130 million. That would also be a record, but for a sculpture.

There are cheaper options too, Claude Monet’s Le Parlement is estimated to go for around $35-40 million. If that is not in your price range, they will also have a silver spray paint silk screen of actress Elizabeth Taylor, which will go for around $25 million.

If it all goes well, the auction will earn around $500 million on the night.