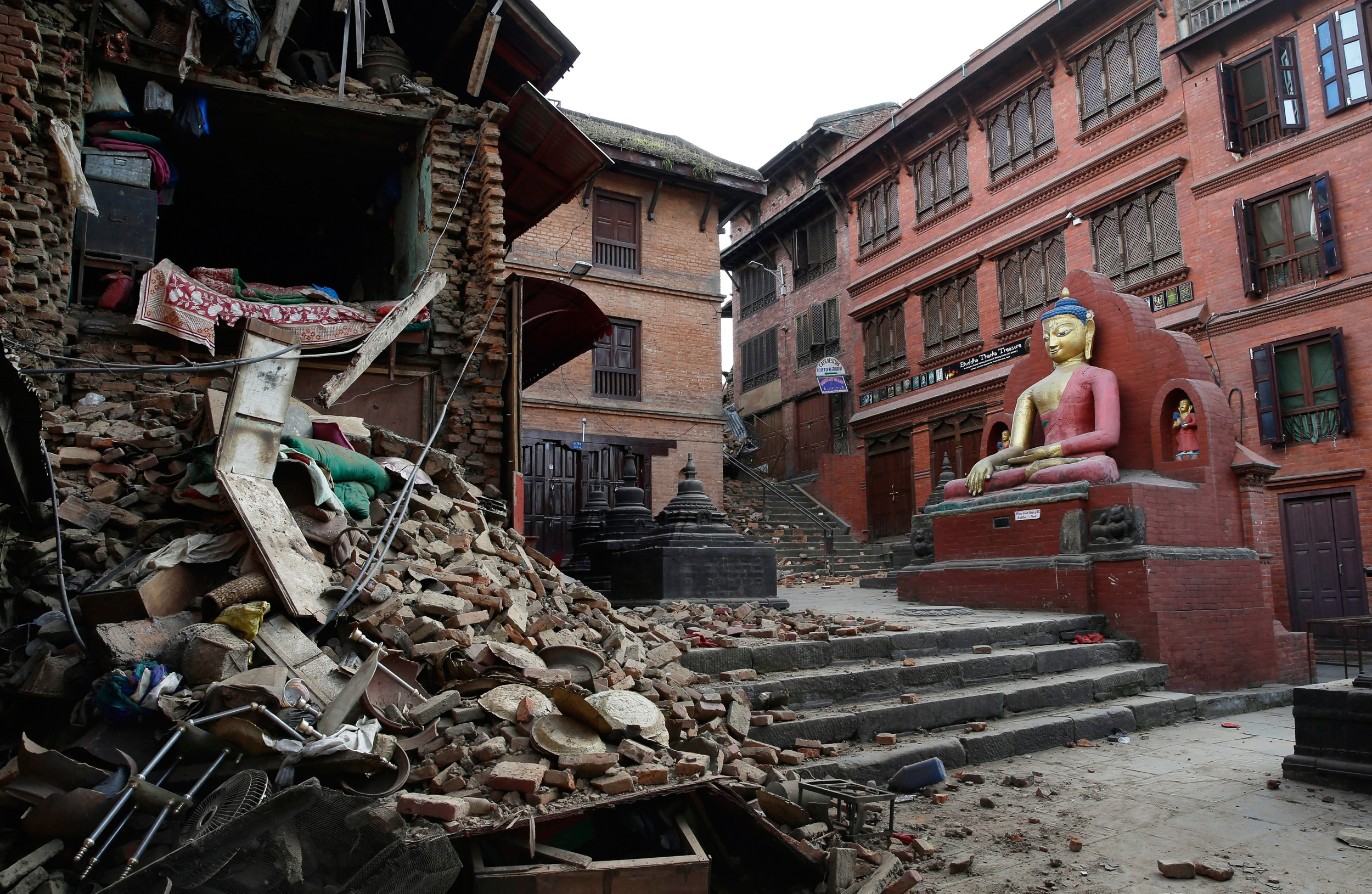 Only less than three weeks after a devastating earthquake hit the Himalayan nation in April, panic spread across Nepal as a second powerful earthquake brought down buildings weakened by the first one, killing 66 people including 17 in neighbouring India and one in Chinese Tibet.

A majority of the casualties were in villages and towns east of Kathmandu. The catastrophe comes as the country was just beginning to pick up the pieces from the April 25 quake that left at least 8000 people dead. 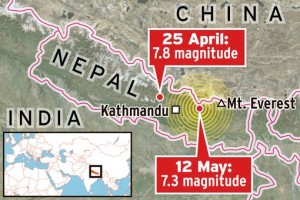 The US military’s Pacific Command said that a Marine Corps helicopter involved in the relief efforts, with six US Marines and two Nepali soldiers on board, had gone missing.

According to coordinates given by the US Geological Survey, the new 7.3 magnitude earthquake was centered 47 miles east of the capital around a hilly area close to the Chinese border, unleashing landslides in valleys near Mount Everest.

Villagers who watched their homes collapse claim that they only survived because they were already living in tents.

Some villages in the worst-affected Charikot area were seriously damaged with people still trapped under rubble, aid workers reported.

Dan Sermand, emergency coordinator at medical NGO Medecins Sans Frontieres, which surveyed the area by air and saw multiple landslides, said they “still don’t have a clear view of the scale of the problem.”

The United Nations said it has only raised 13 percent of the pledged $423 million needed to help Nepal recover from the first 7.8 magnitude quake. Relief workers said they were already suffering from a shortage of materials before the second quake hit.

Brian Kelly of the International Organization for Migration, at a large relief camp in the hill-top town of hard-hit town of Chautara, complained: “Why are (internally displaced people) sleeping on our office floor? Where are our tents? Where are our tarpaulins? Where are our hygiene kits?”

In the town of Sangachowk, residents were outside receiving government food aid when the second quake struck with many watching their homes slowly falling down a hill.

Ashok Parajuli, 30, said, “we watched it go down slowly, slowly.”

Top Thapa, owner of Charikot Panorama Resort in a town where at least 20 bodies were recovered, said the recent quake was at least as strong as the last. He added that he “saw houses falling, collapsing along the ridge” as well as five or six multi-storey buildings coming down.

Politicians dashed towards the exit of Nepal’s parliament building in Kathmandu as the quake hit, with office towers swaying in places as far away as New Delhi in India. The tremors began around 12.30 and could be felt in Bangladesh, and were followed by a series of powerful aftershocks.

After the quake, hundreds of people frantically took to the streets to check on relatives and desperately tried to call family members on mobile phones.

In other places, people huddled in public spaces, too frightened to venture outside.

“I am very scared and I am with my two sons. The school building is cracked and bits of it, I can see they have collapsed,” said nurse Rhita Doma Sherpa who works in the Mountain Medicine Center in Namche Bazaar, a departure point for trekkers headed to Everest.

“It was lunchtime,” she said. “All the kids were outside. Thank god.”

The usually bustling lodges and tea houses around the Himalayas were close to empty after thousands of trekkers fled the April quake, despite May being the peak season for climbing and trekking in Nepal’s high altitude peaks. Dambar Parajuli, president of the Expedition Operators’ Association of Nepal, said mountaineers seeking to climb the world’s tallest peak called the season off 18 people were reported to have died as a result of landslies and avalanches triggered by last month’s quake.

In Lukla, a trekking departure point where buildings cracked and small landslides were triggered, Spanish trekker Susana Perez said she “saw the mountain in front of us fall down – earth and rocks. There were some houses underneath but it was not clear if they were hit.”

Indian and US military aircraft flew at least 60 injured people from affected areas to Kathmandu.

Hundreds of thousands of buildings in the country have been destroyed or severely damaged; among them ancient Hindu and Buddhist temples.

Some foreign rescue teams have returned home from Nepal. But because of the second earthquake, they may need to be called into service again.

Israeli Prime Minister Benjamin Netanyahu said at a welcoming ceremony for an Israeli military rescue delegation on Tuesday: “”I know that you are already prepared for the next mission, anywhere it might be required. And to judge by the news, it is possible that such a mission now faces us.”