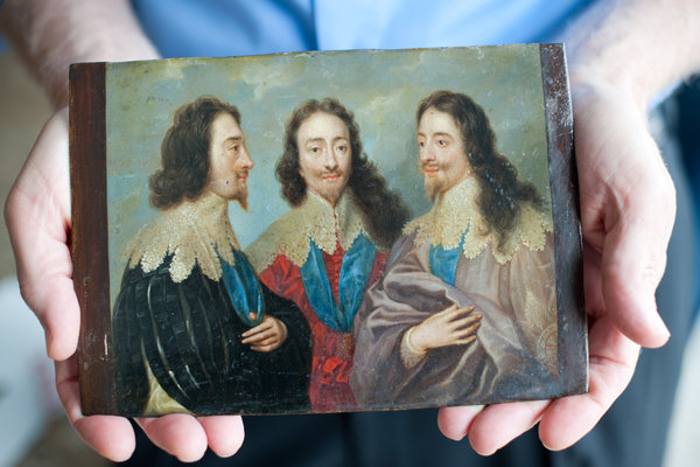 As the Allied forces swept through Germany in 1945, museum officials in Dessau scrambled to hide their art treasures in a nearby salt mine, where they would soon be discovered by American soldiers.

Most of the art remained there, but three valuable paintings ended with an American tank commander, who won them in a game of poker. Maj. William S. Oftebro kept them and mailed them home.

70 years went by with his family holding onto them, most recently on the wall of his widow’s room in an assisted living center in Texas. Yesterday, all of that ended when the paintings won in the poker game began their journey home.

In a ceremony at the State Department in Washington, the three treasures from Dessau and two other paintings taken by American soldiers during the war were handed to the German ambassador to the United States, Peter Wittig, in an event organized by the Monuments Men Foundation, based in Dallas. “I just couldn’t keep them,” the major’s stepson, James Hetherington, 71, of Dallas, said. “Whether he won them in a poker game or not, they were stolen property.”

Even thought looting was pretty common in World War II and a lot of time has passed since, only a few of the treasures taken have made it back. It is said that thousands of valuable paintings and items crossed the Atlantic in footlockers and mail parcels in the 1940s.

The stolen property is only a small percentage of what the Nazis actually looted during their reign of terror, but it shouldn’t have happened. Gen. Dwight D. Eisenhower had issued strict directives forbidding such thefts. 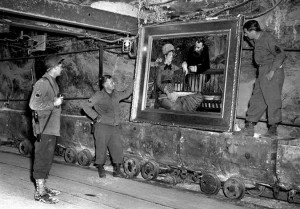 “Yes, they were suffering and losing buddies,” said Robert M. Edsel, chairman of the board of the foundation, which chronicles and promotes the return of art stolen during World War II. “But they knew what they did was wrong.”

Mr. Edsel has spent a lot of years researching a small group of American troops who were assigned to take care of Germany’s biggest treasures when the war was coming to an end. He believes the return of these treasures will make others do the same. “We just have to hope the heirs will come forward now that they’re discovering these things as the veterans die off,” he said.

Stolen treasures are not returned very often. In 1992, rarities from the eighth century, including a gold-and-jewel-studded Bible cover, a hand-carved ivory and gold chest, and a rock-crystal silver reliquary, went back to a Lutheran church in Germany. This after they paid $3 million to the family of the Texas soldier who had them. In 1999, a 16th-century painting of Christ by Jacopo de’ Barbari was recovered by a museum in Weimar, Germany after a man tried to negotiate a 40,000 reward saying it mysteriously appeared in his shop. It didn’t go well for him, he was arrested and charged with selling stolen property. In 2013, Italy got some treasures back when a member of the soldiers family gave them eight antique manuscripts taken during the war.

If you want to see more about this watch “Monuments Men”. The film is about a World War II platoon sent to rescue art masterpieces from Nazi thieves and return them to their owners. This movie actually made Hetherington change his heart and return the paintings.