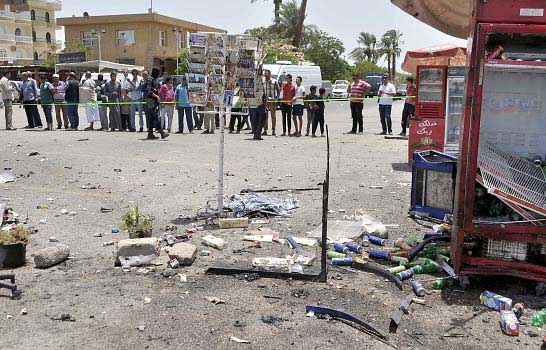 A suicide bomber detonated himself in the southern Egyptian city of Luxor near the ancient Karnak temple on Wednesday, security forces said, a possible sign that militants may be targeting the country’s economic recovery.

While officials claim that no tourists were hurt from the attack, it was the second in just over a week on a major tourist site in Egypt, where tourism acts as a major source of income and foreign currency.

Since the toppling of Mohamed Mursi at the hands of the military in 2013, militants have slaughtered hundreds in a campaign targeting mostly police and military personnel.

President Abdel Fattah al-Sisi, who as army chief ousted Mursi after mass protests against his rule, had pledged to revive an economy devastated by turmoil since an uprising toppled Hosni Mubarak in 2011, ending his 30-year rule.

No one has claimed immediate responsibility for the attack, which revived memories of 1997 when 58 tourists and four Egyptians were killed in an attack by Islamist militants at another temple nearby.

Mubarak took years to stamp out an Islamist insurgency in 1990 which primarily targeted tourists, members of security personnel, and government officials.

But fears that militants, which have pledged allegiance to Islamic State, is shifting their focus towards tourism targets arose over a week ago after gunmen on a motorcycle shot dead two officers of Egypt’s tourism and antiquities police force near the pyramids of Giza.

Antiquities Minister Mamdouh al-Damaty said on Wednesday that he had ordered security to be tightened at ancient sites throughout Egypt. The health ministry stated that four Egyptians were injured in the latest attack.

According to security sources, security had already been stepped up in response to the shooting near Giza pyramids.

“Our investigations confirmed to us that those who are behind the terrorists want to target police and hit the Egyptian economy at the same time,” one of the sources said. He added that the militants were aiming to “grab the world’s attention” by executing their attack to coincide with a pan-African trade conference in the Red Sea town of Sharm el-Sheikh, which the World Bank president and Sisi were attending.

“They knew there was an important conference in Sharm el-Sheikh,” the source said.

A statement by the Interior Ministry on Karnak said that three “terrorist elements” were stopped from passing a security cordon by security forces protecting the temple.

The ministry also added that two assailants were killed, one by detonating a bomb he was carrying. A third remains injured after being shot in the head. They were carrying five explosive devices, guns, and ammunition.

Nico Wuertz, a German tourist visiting Karnak at the time, said:  “We were sightseeing in the temple when we heard an explosion and then shooting. Police asked us to seek shelter. We were afraid but nothing happened.”

“We will continue our vacation. Egypt is a great place, many things to see and sunshine all the time. But there is also some fear now,” he added.

Police closed off the blast site and interviewed witnesses. One tourism worker noted that “tourism was already weak. This attack will kill it.”

The latest violence will hinder Egypt’s efforts at winning back tourists and foreign investors who only recently welcomed Sisi’s economic reforms.

Separately, security forces intercepted two roadside bombs in the Cairo area, while a soldier was killed by gunmen in the North Sinai town of Rafah, bordering Israel and the Gaza Strip, according to security and medical sources.