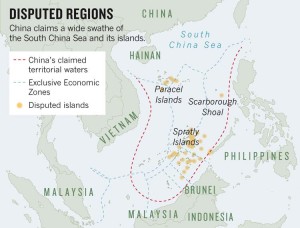 Philippine President Benigno Aquino pretty much compared China to the Nazi Germany on Wednesday. This all because of the nation’s activities in the South China Sea, which he thinks is just like Nazi Germany’s expansionism before World War Two. This isn’t the first time he’s made these remarks, just last year he made similar ones. Beijing was not happy last time and certainly won’t be this time.

Aquino, who is meeting with Prime Minister Shinzo Abe on Thursday, to discuss defense ties with Japan, told Beijing to rethink on what they’re doing in the lands, which are in dispute. China has created controversy and made nearby nations unhappy by building artificial islands in areas where several Asian countries are claiming part. Just a few weeks ago, pictures taken from far away revealed that China is building an airstrip on one of them.

He was asked about Washington’s involvement in the dispute between the nations, and he said that they’re key and threw in the comparison with the Nazi Germany’s territorial expansion before World War Two. “If there was a vacuum, if the United States, which is the superpower, says ‘We are not interested’, perhaps there is no brake to ambitions of other countries,” he said at an event sponsored by the Nikkei business newspaper.

He went back in time and recalled a documentary made about the Nazi’s and their way of taking land, Aquino added: “The commentators on this documentary were saying, ‘If somebody said stop to (Adolf) Hitler at that point in time, or to Germany at that time, would we have avoided World War Two?'”

Aquino has made these comparisons in the past and China believes they’re “outrageous and totally unreasonable”. The president also said what China is doing with the land and their projects violates an international agreement. 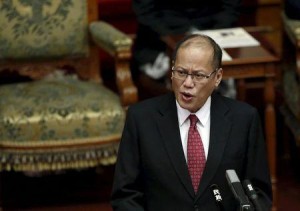 China and many other nations signed an agreement back in 2002, which prevented them from taking these unoccupied islands and building new structures. This all with the purpose of not creating disputes between the 11 members of the Association of South East Asian Nations (ASEAN). “Perhaps they should re-examine all of these efforts and see whether or not this is necessary given the increasing tensions.”

Aquino will now meet with Japan, and the two are going to try to close out a deal that will bring defense equipment and technology. Japan wants to help the smaller Asian countries going up against China and their massive navy.

Japan is an expert on this subject, they eased restrictions on arms exports last year and already have deals like this with Britain, Australia, France and United States.

Aquino also highlighted the good relationship between the two. “Japan has been steadfast in demonstrating its solidarity with the Philippines as we advocate freedom of navigation and the rule of law in the face of China’s unlawful territorial claim,” he said. “For Japan’s support for our peaceful, lawful, and principled approach, again we thank you.”

Japan is not in the dispute of the South China Sea, but is linked to a different dispute with China, this one over tiny isles in the East China Sea. The two claim 200 nautical miles EEZ (exclusive economic zone) rights, but the East China Sea width is only 360 nautical miles. China claims an EEZ extending to the eastern end of the Chinese continental shelf, which goes deep into the Japanese’s claimed EEZ.