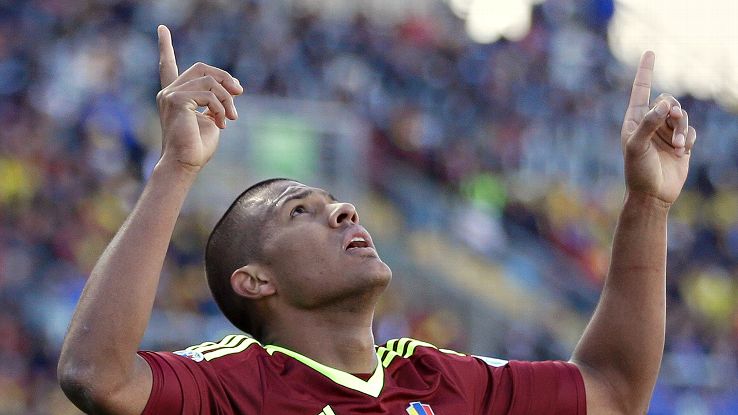 Salomon Rondon gave the three points to Venezuela with a fantastic header. Colombia came in as one of the favorites to win it all and left with a 0-1 loss.

Noel Sanvicente’s side is not even close to Colombia in the rankings but showed they have improved since he was chosen for the position last year.

Colombia was nothing close to the team we saw at the World Cup, they eventually woke up after Salomon Rondon put Venezuela up in the 60th minute but it was too late. Venezuela kept defending well and did not give space to Real Madrid star James Rodriguez. Colombia was given possession for big parts of the game but could not do anything with the ball.

They came in with a star studded roster, mostly the same squad from the World Cup but now with Radamel Falcao. Venezuela threatened to score early with a shot from Vargas after a great pass from Arango. The beautiful play was stopped by Ospina, who punched the ball to the side.

Colombia had an opportunity after a lob ended in Falcao’s legs but the shot went over the net. That was the only dangerous attempt from the fourth ranked team in the first half. Fifteen minutes into the second half, Arango made Colombia pay with another great play, he flicked up and crossed the ball to Alejandro Guerra at the far post and he sent it back to Rondon, who headed the ball to the bottom right corner of the net. Ospina had no chance to stop it.

After allowing the goal, Colombia woke up and started moving the ball. Their biggest attempt came when Rodriguez took a powerful shot outside of the box but was stopped by Baroja. He then got up and stopped another shot.

Cuadrado had a solid chance after a corner but missed. Colombia’s bench got up thinking he had a goal but the ball went wide. From then on, it was a defensive game for Venezuela, hanging on for the three points and the top spot of Group C.

The second game of Group C got off to a great start and finished with one too. Brazil, which came in to the contest as a heavy favorite to win big against Peru, struggled for most of the match but managed to take the three points with a last minute goal. 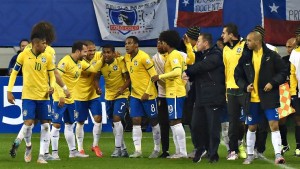 Peru surprised the crowd with a Christian Cueva goal three minutes in. The lead only lasted two minutes, after Neymar headed in a cross.

The two early scores had many thinking the contest would be a goal festival, but that was not the case. Brazil struggled for most of the match after the score. Douglas Costa was the hero with a stoppage time goal that put the five time World Cup champion at the top of Group C, along with Venezuela.

Brazil needed the victory, especially after Colombia’s surprising loss to La Vinotinto. The two will play soon and Colombia will have to win to keep their chances of qualifying alive. It will be a rematch of last year’s World Cup knockout stage, which Brazil won. “We expected to face a tough rival. Playing in these kind of tournaments, especially in South America is always hard. Nobody gives anything away. I believe that we played well … It is always important to start winning,” Neymar said to the local press afterwards.