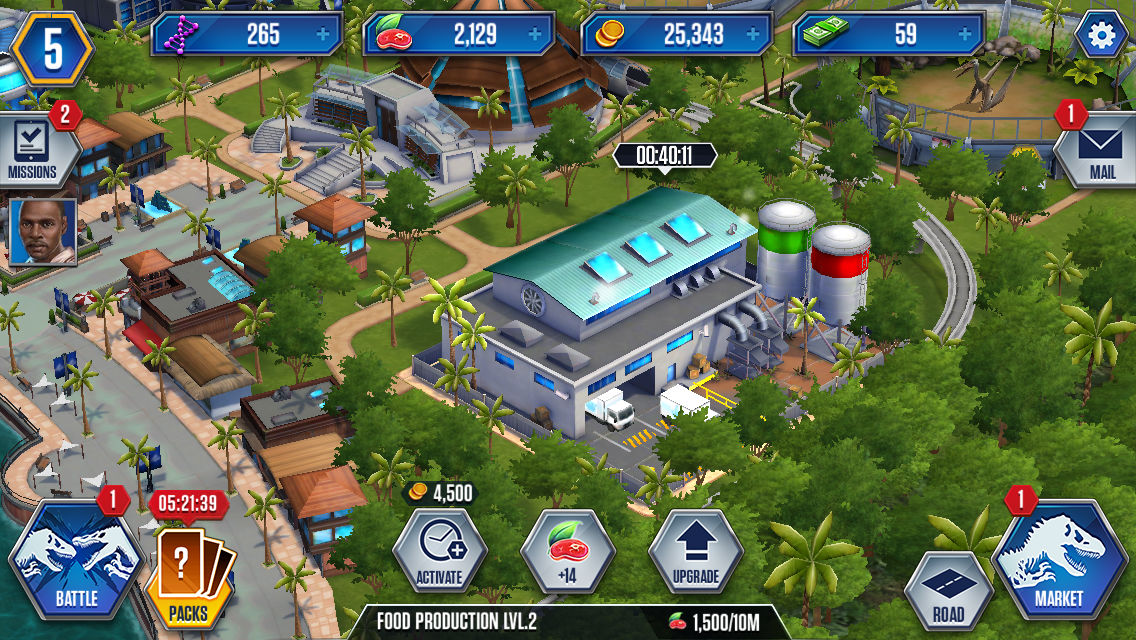 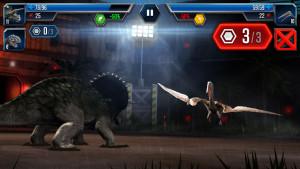 Earn Dino Bucks Through Ads- In Jurassic World: The Game, you can actually earn free dino bucks through the game by watching advertisements. In order to do this, just click on the dino bucks icon at the top of the screen, and then you will be able to select “watch an ad for free dino bucks” and that is all you have to do. It is important to remember though, you need to watch the entire advertisement before you click out of it in order to get credit, which in this case is a free dino buck for every ad you watch. This is one easy way that you can earn free dino bucks without having to do anything too crazy, since the advertisements are usually under 60 seconds each in length.

Build Supplemental Structures- In Jurassic World: The Game, you want to remember to continue building up supplemental structures, such as food buildings and security booths. Not only do these supplemental buildings make your park look more attractive, it also helps generate more income for your park. The more structures you have in your park, the more money you will earn through the game, and then the more items you can buy with the income you have earned.

Claim Free Mystery Packs- One really cool aspect to this game is that about every five hours, you can claim a free mystery pack. Each mystery pack contains different items, such as free money and food, and some will contain DNA to hatch a dino. You might even get a mystery pack that contains special missions for you to do to earn dino bucks. This is why it’s important that you login into the game every four or five hours to claim your free mystery pack, which then helps you stock up on essential items.

Level Up Your Dinosaurs– In this game, you want to make sure you are constantly leveling up the dinosurs, because it will allow the dinosaurs to evolve into bigger and better fighting machines. The dinosaurs will also earn more money while in the pens if they are higher levels, and the higher the level the dinosaurs are the more money they will be earning.

Use Offense During Battle– When you are engaged in battle, you want to always be on the offensive instead of the defensive. You need to focus your points on attacks, which helps you end the fights quicker and also allows you to get away with less damage. A computer-controlled opponent does not often nullify your attacks with a stacked defense, so you can easily win the battles just by always being on the offense and being aggressive.

Don’t Buy Extra Incubators- In this game, you also want to stay away from buying extra incubators. You will end up spending 10 cash just to get the incubator, but it does not unlock it for you permanently, so then you end up spending more money to keep it growing, and it does not end up paying off in the end.

Pay Attention to Class Advantages- In Jurassic World: The Game, there are class advantages that you need to keep in mind. Such as Carnosaurs beat Herbivores, Herbivores beat Pterosaurs, which beat amphibians, which beat carnivores. You can hit the info button when you are picking your dinosaur team if you ever forget how the class advantages work, but remember that it does not grant you an automatic win. You will get a 50% damage and defense boost though when you choose a dinosaur that is weak in the same class as your opponent.

Wait for the Live Arena- While you might be tempted to go into the live arena when you first start playing the game, it is best to wait to get in there until you have a very good team of dinosaurs because you will probably just die within seconds. Right now, the match making abilities in the game are a little off, which means you will end up facing off with dinosaurs that are way above your levels, which then means you are likely going to lose the battles. You need to wait until about level 20 before you engage in the live arena, because you will likely be paired with opponents way higher than you since the game has not yet fixed how the matches are made.

DNA Hatches Dinosaurs– DNA is acquired in this game often times by completing the special missions, but it can also be acquired through player-vs-player duel wins. You want to use the DNA to buy more dinosaurs that you have already unlocked through the market. You want to try to get a lot of rare dinosaurs because it’s very beneficial, especially in battle. The more dinosaurs you have, whether they are rare or not, will also earn you more money.