Amazon.com, Inc. (NASDAQ:AMZN) is giving a little love to its Prime Music service today with the addition of exclusive acoustical recordings from a number of artists. It will feature popular as well as less known artists. The recordings can be used through the official website or the apps available for smartphones.

The service is only available if you’re a Prime member, which costs $99 a year. But don’t worry, if you’re not paying for the service, you can get the songs for a limited time on the website. Shoppers will be able to play them while they look at products through a popup web player.

The addition is not that big compared to what other music streaming services are doing, with their millions of songs currently available. The good news for the company is that this collection is an Amazon exclusive. The move is nothing new, there are other services out there trying to do the same. Things in the music streaming industry are only getting harder and harder with all the great services available, so Amazon has to do all it can to stay alive.

Amazon has not fully gotten into the music streaming, but competitors know that they could become big players soon. Last year, the company released its own Christmas album and was involved in the soundtrack of Transparent, a TV series they made. Now it’s focusing on promoting its acoustic addition.

Amazon hasn’t shown its full strength just yet, but it could put a solid effort soon and compete with the other giants. The company has already been successful with its Studios side, which created Transparent and won the Golden Globe Award for Best Television Series at the 72nd Golden Globe Awards. 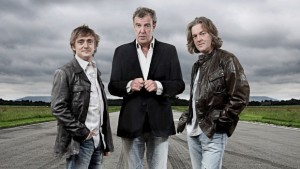 The exclusive acoustical recordings aren’t the only addition to the company, they just paid a whopping $250 million to sign the three hosts from Top Gear, who left the show after Jeremy Clarkson was told that he would not come back to the series.

Reports say that Amazon paid the millions to secure three years of global rights for a new series. They outbid other candidates, who were looking to continue Top Gear’s success with a new show. The three had been quiet on their plans but it seems like they will work together once again. Top Gear was one of the most popular shows on TV before it ended. The three hosts had worked together for years and were not happy that Clarkson never got a new contract after an incident with a producer got him suspended.

Netflix, Inc. (NASDAQ:NFLX)  was said to be one of the top candidates and they were really close to sealing a deal before Amazon came in. With the deal, Amazon will be able to provide more to its Prime members, who pay $99 a year for the service. The new Top Gear show will definitely bring more subscriptions once its released next year.