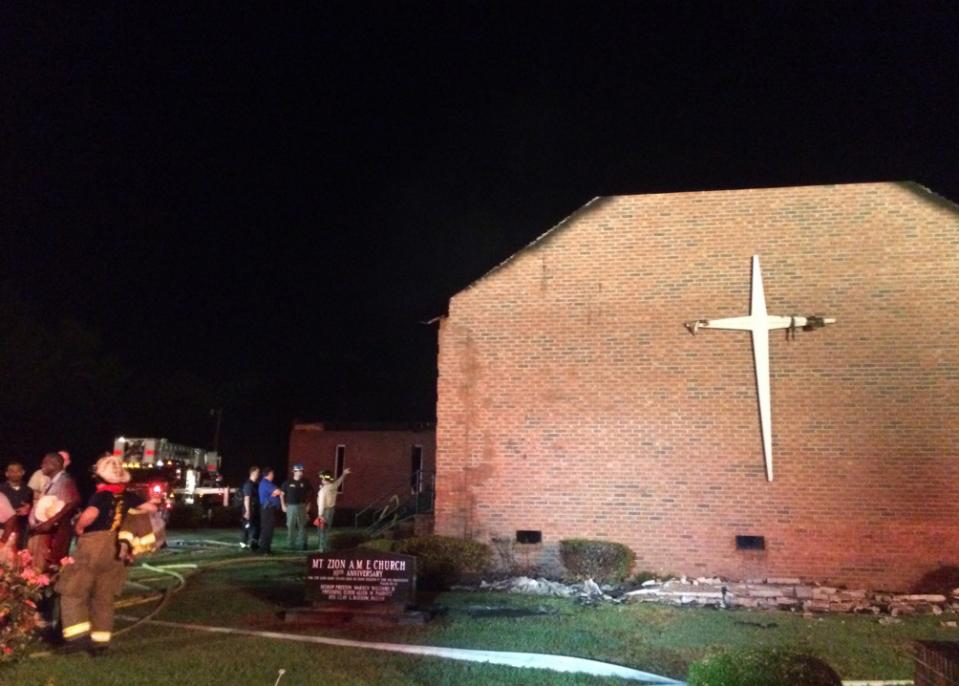 An African-American church that was burned down twenty years ago by the Ku Klux Clan caught fire again Tuesday night. Authorities said it was too soon to say what caused the church to burn. No injuries have been reported and no one was believed to be inside at the time of the fire.

The fire at the Mount Zion African Methodist Episcopal church in Greeleyville broke out at a time when authorities are investigating two other incidents in black churches, including one that happened four days ago at Aiken, South Carolina. As of right now, the fires don’t appear to be linked.

Greeleyville is a small town with less than 500 residents and is located north of Charleston, where nine members of a church were shot and killed two weeks ago. The dead, six women and three men, were all African American. Eight of the nine victims died on the scene.

Members of the State Law Enforcement Division were informed of the fire and got there while it was still on, Division Chief Mark Keel said. But he said they will have to wait until everything clears out before using dogs and other tools to determine what started it. He said investigators 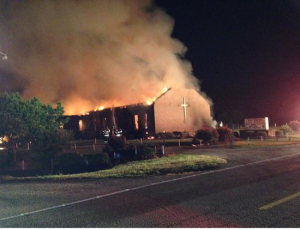 will be at the place later today. “We do know they apparently had some strong storms,” Keel said. “Talked to a guy who said they had a lot of lightning down there tonight. I don’t know whether that had anything to do with it at all.”

The fire brought out the sad memories of those who witnessed it burn twenty years ago, said Williamsburg County Councilman Eddie Woods Jr., who went to the scene after hearing about the fire. “That was a tough thing to see,” Woods said. “It is hurting those people again. But we’re going to rebuild. If this was someone, they need to know that hate won’t stop us again,” Woods said.

Several fires have come just days after the tragedy at the church in Charleston. The one who carried out the massacre, Dylann Roof, has been charged with nine counts of murder and the FBI is investigating some things found about him on the internet. Roof could face a sentence of either death or thirty years to life in prison. The attack has also led to calls for the removal of the Confederate flag from statehouse grounds.

The church was set on fire in 1995 by two Ku Klux Klan members, they pleaded guilty and revealed that they had been involved in the burning of another church right around the same time. They both received a 20 year sentence.

A year after the incidents, President Bill Clinton visited the church and asked people not to follow what these two had done. He gave the church a plaque to commemorate his visit, and the church grew four times since it burned down. “The American people are the most religious, church-going people of any great democracy,” Clinton said. “We cannot let someone come into our democratic home, the home of our faith, and start torching our houses of worship.”