A malaria rapid diagnostic test has been developed that can be used in registered drug shops, and researchers say that this new testing can help improve the overprescription of malaria drugs by 73 percent. 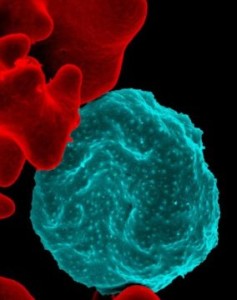 The new study, which was published in PLOS ONE, researchers have found that since this new rapid diagnostic testing reduces the overprescription of the malaria drugs by 73 percent, it helps improve the use of the valuable malaria drugs. The drug shops where the new rapid diagnostic testing is going on have been popping up in Uganda, which is one of the highest endemic regions for malaria in the world. The researchers were from the Artemisinin-based Combination Therapy Consortium at the Ministry of Health in Uganda, and other researchers from the London School of Hygiene & Tropical Medicine in the United Kingdom were also involved in the study. Nearly 80 percent of all malaria cases that come out of Uganda are treated in the private sector, which is why the specific researchers from these places were involved in the study. Almost all of the 15,000 patients who were visiting the drug shops in Uganda with a fever chose to purchase the rapid diagnostic test when they were offered by the trained vendors who were taking part in this study. After the test was performed, the study results showed that less than 60 percent of those patients had a positive test for malaria. The vendors typically would comply with the results of the diagnostic test, which is how the researchers were able to reduce the prescription of the malaria drug by 73 percent.

In many of the malaria-endemic areas, the private sector is a common source of treatment, especially when there is not much access to the public health facilities. The patients buy the antimalarial drugs in the drug stops to medicate themselves, even when malaria is not often the cause of the fever. This means that a lot of the time, the treatment that should be given out isn’t, and the malaria drugs are being used inappropriately, which then means that it is being overprescribed to the majority of the people. The lead author of the study is Professor Anthony Mbonye, who is from the Ugandan Ministry of Health, and he said that “Our findings show that it is feasible to collaborate with the private health sector and introduce malaria rapid diagnostic tests in drug shops. The next step is to refine the strategy and understand the cost implications of scaling it up in Uganda. Our long term aim is to provide evidence to help the World Health Organization develop guidance to improve malaria treatment in the private sector.”

Dr. Sian Clarke is a principal investigator in the study, and Clarke is from the London School of Hygiene & Tropical Medicine. Clarke said that “This study shows that rapid diagnostic tests can improve the use of artemisinin-based combination therapies — the most effective treatment for malaria — in drug shops, but it’s not without its challenges. These tests alone will not improve the treatment of other diseases. We now need to continue working with the Ministry of Health to investigate how to improve our approach and expand it to other common illnesses.” Right now, the drug shop vendors treat patients based on the signs and symptoms they are exhibiting without testing their blood for the malaria parasites, which is what is recommended by the World Health Organization. Although the World Health Organization is thinking about stopping the potential spread of such a powerful disease, this type of healthcare is basically resulting in the patients being overdiagnosed with malaria. There are numerous reasons that someone could have a fever, so just automatically assuming the malaria is causing it and then beginning treatment for malaria is not only inappropriate, it is also dangerous, especially in areas where other types of serious infections can be the root cause of the illness.

The rapid diagnostic tests are so simple in terms of the training needed to diagnose the malaria, and it provides an alternative to microscopy, which is a method that requires laboratory equipment along with a qualified staff. The rapid diagnostic test can help the healthcare workers and the vendors to prescribe the right treatment for malaria, and this type of testing can help the patients who live in the remote locations where getting to a proper hospital is not really a possibility. An investigation which was conducted along the trial was published in Critical Public Health, and this investigation found that the malaria tests were not a simple fix within the private sector. The patients were welcoming the rapid diagnostic test and the government involvement in helping improve the drug shops and the vendors were feeling more qualified like real healthcare workers. The researchers do warn though that this could give an impression, wrongly, that the vendors have the needed skills and qualities for the testing and treatments, and the researchers said authorities are needed for verification.

So since this study came out, the researchers have since received a new grant which will help them investigate whether or not training and equipping the drug shops would be feasible. If this happens, the drug shops would be working with three of the more critical diseases, which are malaria, pneumonia, and diarrhea. If the vendors do get the needed training and equipment to help diagnose and treat the three important diseases, it can help reduce the rates of infections and transmissions, and this can then help reduce the mortality rates among people living in these situations, such as those living in remote parts of Uganda. Beyond the ability for the people to get the care they need quickly, we are going to be seeing an increase in the amounts of available malaria drugs, since there will be less people getting the drugs for the inappropriate reasons. The more malaria drugs that are available the cheaper the malaria drugs will be, and the malaria drugs will be going to the right people who could actually benefit from the drugs.