Daimler AG (ETR:DAI) a German multinational automotive corporation headquartered in Stuttgart, Baden-Württemberg, plans to test self-driving trucks on German highways later this year. The testing will come after authorities approve the plans. The information was revealed by management board member Wolfgang Bernhard. 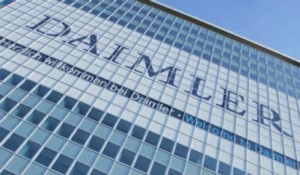 The testing will first take place in Baden-Württemberg, where their headquarters are located, but they won’t be trying out cars like many other companies are doing. Mr. Bernhard says the company will test a group of self driving trucks, which will be commanded by a computer. He expects the trucks to be ready for production in two or three years, which would be way sooner than the cars already being tested in some U.S cities.

The new technology will be very safe, according to him. He added that 97 percent of all accidents are caused by human error. He also mentioned that the technology won’t eliminate human drivers because they will always be needed to ensure that technical glitches don’t happen. “I can assign driving to the machine, including braking and accelerating, but I need to supervise it.”

He knows that self driving trucks and cars take time to test and design but he believes that they could be ready for production soon.

Many companies are trying to do the same with cars and are already testing them in roads with real traffic. One of them is Google Inc (NASDAQ:GOOGL), who has recently released a two seater and has already tested a Lexus SUV. Their cars have been involved in a number of collisions, but the company says all have happened because of human error. Weeks ago, Delphi Automotive PLC (NYSE:DLPH) and Google met on a California road with their prototypes, the incident made headlines because some sites reported that the two were in a near miss. But Google denied what was said and made it clear that nothing big happened. The incident occurred as the Delphi car, an Audi Q5 fully equipped, was preparing to change lanes right around the same time as the Google car, a Lexus RX400h. The Google car got in front and the rival had to abandon its plans, demonstrating that their car is alert at all times.

Google currently 32 autonomous vehicles out in the roads, many of them which are driving around in California, near their headquarters. Their Lexus vehicles will soon be joined by a two seater that needs no gas pedal or steering wheel. The prototype is the first vehicle built from scratch for the purpose of self-driving, Google says. The company plans to have these cars available to consumers by 2020. ”These prototype vehicles are designed from the ground up to be fully self-driving,” Google said. ”They’re ultimately designed to work without a steering wheel or pedals, but during this phase of our project we’ll have safety drivers aboard with a removable steering wheel, accelerator pedal, and brake pedal that allow them to take over driving if needed.”

Daimler plans to be the first to release self driving trucks, Mr. Bernhard says, adding that he is not afraid of other giants in the business coming up with their own creations.