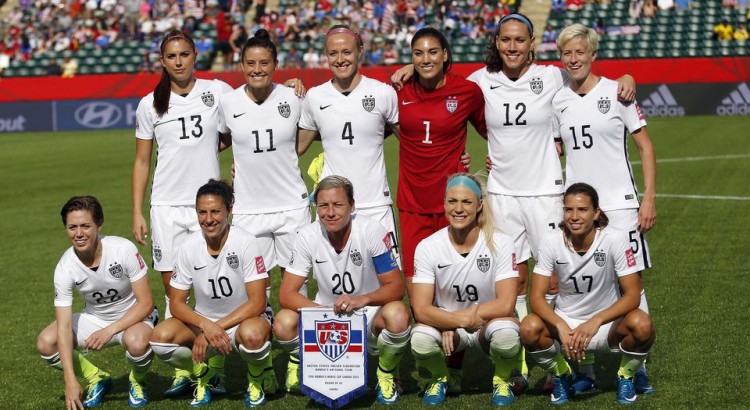 All throughout the BC Place Stadum in Vancouver Canada, you could hear the famous “I believe that we will win” chant roar through the crowd.

In the early stages of the game, the USA team took a marginal 4-0 lead over their opponent. Carli Lloyd had also set a record by having the fastest hat trick in Women’s World Cup history. Lauren Holiday pushed the team even further in the lead by putting another one in the net.

Japan answered back by ending the USA team’s 540 minute shutout period. They retaliated and the score was 4-1 in the 28th minute of the game. Japan then put another one on the score board, when a ball crossed into the box was accidentally headed into the USA goal by Julie Johnston.

This change in momentum did not stop the USAWMNT, and they continued to play strong. Tobin Heath placed a ball into the net just two minutes after, and the score was 5-2. The game was now the highest scoring World Cup Final, with a total of seven goals.

The Golden Ball and Golden Glove were awarded to Lloyd and goalkeeper Hope Solo. These two were named the best goalkeeper and best player in the 2015 FIFA Women’s World Cup. This was Solo’s second Golden Glove (she won the same award in 2011), but Lloyd’s first Golden Ball award. She also became the second American to win the Golden Ball, following Carin Jennings who received it in 1991.

The team had set two main records in the 2015 World Cup Final. One was being the one and only country to win the Cup three times. The second was having the most goals scored in a Final, reaching an astonishing five goals. The most goals scored by teams in the Final are two.

5th Minute, USA – Carli Lloyd: Lauren Holiday takes a free kick from outside of the box, and sends the ball into the middle. Julie Johnston flicks the ball, and manages to get it past a group of players into Carli Lloyd’s feet. Lloyd is infront of the net and takes a tap with her right foot. She is now one goal away from a hat trick. USA:2, JPN:0

14th Minute, USA – Lauren Holiday: Tobin Heath sends in a pass  from the midfield directed toward Alex Morgan. Japanese defender Azusa Iwashimizu gets in the way and attempts to clear the ball with a header, but sends the ball in the hair. Lauren Holiday sees her opportunity and volleys the ball with her right foot, scoring her first goal in the Cup. USA:3 JPN:0

16th Minute, USA, Carli Lloyd: Carli Lloyd intercepts the ball near the midfield line and manages to beat a defender. As she crosses the midfield, Carli Lloyd rips a shot at Japan’s net. Ayumi Kaihori is unable to reach it, and Lloyd gets her hat trick. USA:4, JPN:0

28th Minute, JPN, Yuki Ogimi: Nahomi Kawasumi sends a great ball to Ogimi, who is stationed inside the box. She then beats defender Julie Johnston, rotates until she has a good look, and launches a powerful shot. Hope Solo attempts to stop it, but USA’s shutout streak ends. USA:4, JPN:1

52nd, JPN, Julie Johnston (O.G): Johnston attempts to clear a ball sent in from a free kick, but instead heads it into the USA goal. USA:4, JPN:2

54th, USA, Tobin Heath: Aymi Kaohori, Japan’s goalkeeper, hits a ball from a corner-kick outside of the danger zone. However, the ball lands at Morgan Brian’s feet, and a quick cut back to Heath sets her up for the last goal of the tournament. The ball is buried into the back of the net, ending the final with the score of USA:5, JPN:2.

Vince Wickmann
I enjoy everything related to technology and entertainment. Anything from PC and console games to sports and movies. Love stand-up comedy, Netflix, and learning about technological advancements. Huge fan of the NY Giants, and Real Madrid.
RELATED ARTICLES
Sports