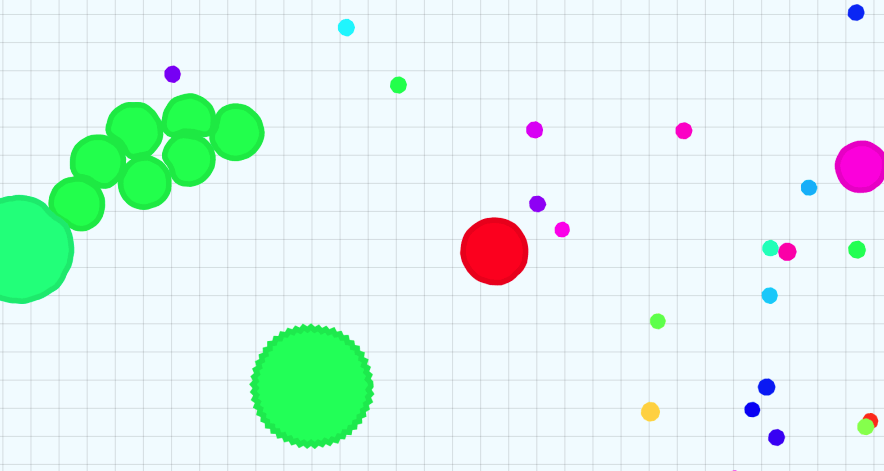 The video game scene is constantly growing from new indie games to AAA titles continuing fan favorite series or brand new IP’s like No Man’s Sky. So it’s no surprise that there are breakout titles that seem to come out of no where and emerge as a hit game that every on YouTube is playing. These sudden rises to fame don’t discriminate from platform to platform as massively addicting breakouts include Flappy Bird, Candy Crush, and the Five Nights At Freddy’s series. These extremely frustrating and addicting games created a wildfire of let’s plays on YouTube along with friends competing to be better than their friends as they tirelessly play to get a higher score or survive more nights. While Flappy Bird has died down since creator Nguyễn Hà Đông removed the title from both the Android and ios app store, a brand new survivalistic title has sprouted out invigorating players to survive and become bigger and bigger. I’m talking about the breakout game that is agar.io.

Agar.io? You may be left wondering what this game is and what it entails if you are not largely informed with YouTube gaming or big name Youtubers such as Markiplier, Captainsparklez, and Pewdiepie. The concept is quite simple as you play as as teeny tiny circle named by you. You then need to eat tiny dots littered throughout the square playing area to slowly become larger and larger while other players frenzy to do the same thing. By pressing space you can then split your mass in half to collect more dots and players. But you must be weary as you can be eaten by larger players. Think of it like big fish eats little fish in the sense that you can’t eat players that are bigger but players that are smaller are fair game to munch on. This aspect is what incites the rage and desire to keep playing as you eventually die. Currently you can play the game on a computor by going to agar.io or by downloaded the game on Android and ios. The app is still relevantly new so expect some bugs and lag and many updates to come.

With a top ten leadership board shown on the top right of the screen, you can see who’s the biggest, baddest circle in your server as you attempt to work your way onto the top ten list. Nothing seems more satisfying than seeing your name on that top ten list because you did it, you entered into the elitist top ten of your server. This game is no stranger to the memes brought about by internet culture and other video games as you are almost certain to run into people playing under the screen name Doge or Reddit. You may think just by hearing about this concept that the game is a rather easy on to play and while you are right in the sense it is an easy game to learn, it is rather difficult to master. Thankfully here are some tips and tricks that can help you turn from a tiny circle to a massive sphere of doom as you move around the server.

Be weary of when you split

The aforementioned splitting caused by pressing the space button is a very useful tactic for eating or people and more dots. When you split your speed increases so very early on in the game if you split you can then collect more dots while you zoom around the map. Later on in the game after you’ve gained some girth, you can split to eat smaller players that are trying to escape. However, when you split you do split your mass in half making you an easier target for other players so try not to split if you are surrounded by players of equal size or those who are larger as they might split to eat both of your circles. It’s all about timing and position when it comes to splitting. Sometimes you’ve got to split to escape death or you are in a good position to eat an enemy player, just be mindful of your surroundings.

Beware of the surroundings! 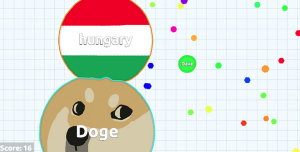 unexpectedly cut you down into many little circles, there is still another thing every player should be mindful of and that is the edge of the map. As you move your way around trying to build your way up, you’re bound to reach the edge of the oversized square. You’ll know you reached it when you can’t go further in a single direction. It’s like trying to move through a wall: you can’t do it. So when you back yourself against a wall or even worse a corner, you are a huge target susceptible of being eaten. And while it generally stinks when you back yourself into a corner, it can be a great opportunity if you can push other players into the corner and trap them as you move in for the kill.

The aforementioned spiked circles that are littered around the map can be used to your advantage despite the fact that they can cut you. When you are just starting out, you can hide inside the green circle if you’re being chased by a larger player. By moving into the spike, other players will have to think twice when chasing you because as much as they’d like to eat you, they don’t want to split into many little circles that you can then devour. And if you are too big to hide in there, you can still dance around them to put some distance between you and some other players as they don’t want to get cut up. 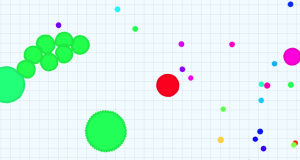 As you will soon learn, once you split, you will eventually reform into one massive circle. You’ll be able to know when you’re reconfiguring when your circles start to merge. So the trick is, if there’s a player that is chasing you and you can eat them at your largest size, have them trail you until you reform and then go on the offensive. To speed up the reconfiguration, once you see the circles start to merge, shake your mouse back and forth as it will slowly but surely reform your circle. However it does take some time to reform so don’t expect to instantaneously refigure, but you’ll learn that in time. You don’t even need to lure the person in to eat them. If you know you aren’t the right size to eat them, lure them into someone bigger. Not only will it get them off your tail permanently, but you can help another person.

Despite agar.io being a large multiplayer game, people tend to go it alone and lone wolf it. And while that is definitely a good strategy, there is strength in numbers. By pressing W you can exude some of your mass, kind of like a donation, to another player. By naming your circle things like “Team?” or “W=Friends”, you can potentially find a teammate to help you trap enemies. However, this method is immensely difficult as many people won’t want to team or just take your excess mass and leave so proceed with caution. And if the whole team aspect doesn’t seem to be working, you can always mislead people with the aforementioned names and lure people in to eat. While this seems ruthless, it is a game based of the just world principle so can you really be blamed because agar.io is survival of the fittest and luckiest.

Let’s be honest, the colored circles in agar.io are nice but not as fancy as some of the pictures that other people play as. Who wants to be a generic colored circle when you could be a country flag or an internet meme. So here’s how you change your circles skin. First, you want to find the perfect skin for you so head on over to agarioskins.com. Once you find the skin of your choice, open of agar.io. When you are about to start a game and have the option to enter a nickname, type the name of your skin you found on agarioskins.com and presto, you are no longer a colored blob but rather a stylish skin dead set on conquering agar.io.

The ultimate tip anyone can offer someone is practice. The more you play the game, the more experience you’ll gain and the better you will become. This advice isn’t mutually exclusive to agar.io either as practicing anything will increase your skill. From Call of Duty to League of Legends, practice practice practice. So don’t be discouraged if you get eaten a lot when you first start playing because as you progress, you will soon do better.

We don’t really know how long agar.io will be the mainstream game that everyone is playing before either another game sprouts up or agar.io just falls off the map due to lack of fun, but now you have some easy to learn tips and tricks to help you reach the top ten leaderboard. Whether you’re the agar.io veteran or agar.io noob you can now join the rest of blobs as you attempt to be the very best like no one ever was. Just remember to always stay calm and relaxed as you play. Nothing stinks more than accidently punching through your computer screen because Doge or Reddit ate you.