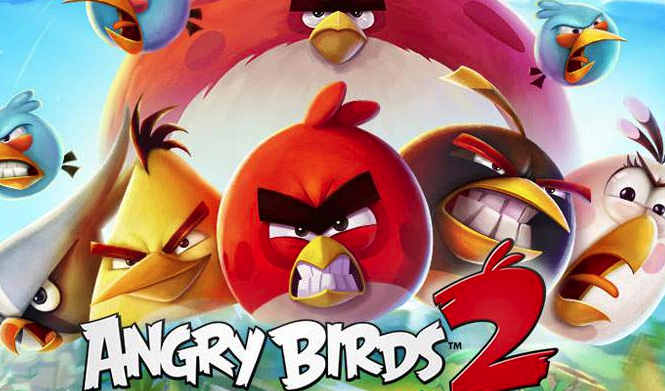 Stuck on a couple of levels in Angry Birds 2 and don’t know what to do?  Are you struggling to get farther in the games compared to your friends?  If you want to know how to be fully capable to do every single level in Angry Birds 2, make sure that you read through this carefully.  This article will contain some of the best tricks and tips that you will ever find and will be guaranteed to help you through a couple levels that you might be having trouble with.

Get to know all of your birds 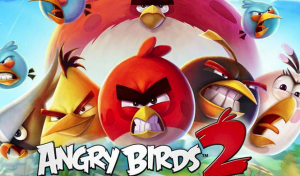 By understanding all of the birds that the game has to offer, you know all of the capabilities it has and ultimately how to use them most effectively.  Now, if you have played Angry Birds 1, you will most likely be able to have the knowledge of most of the birds that Angry Birds 2 with the exception of a couple of new birds which were introduced in the second game of Angry Birds.  If you don’t know any of these and this is your first Angry Birds ever, here are some of the classic ones that will help you start up.  First of all, there is the red bird which will be able to be flung over by the sling shot and then when you tap it in mid air, the red bird will shoot off a gust of wind that will be able to knock over buildings.  The blue bird is also launched over and will split into three birds once you tap it, so if you want to shotgun a certain part of the building structure, the blue birds are a great way of making sure that you secure a pig kill due to the special ability that the blue birds have.

If you want to get past a couple of buildings and the structure is pretty well made, then you will have to use Chuck which will be able to cut through the structures in a clean fashion which will be able to effectively cut through structures without too much trouble.  If you tap Cuck in mid air, he will shoot faster towards the target so that he is as fast as a bullet and cut right through the building that you want to collapse.  Then there is Silver.  Silver will grant you the abilities to click on the screen or tap on the screen so that Silver takes a nose dive wherever you tap her at.  So you are almost able to decisively hit one spot on the building or pig that you want to hit and it will be a great benefit to you if you want to knock down one section on the building or you need to hit that last pig that you need in order to finish up the round.  Using Silver will require you to have some kind of reaction times so that you know when to tap the screen as well as some amount of anticipation which also means that you need to know where you are aiming when you throw Silver. 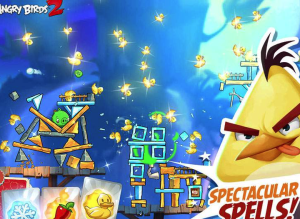 the round.  There are only a couple of spells that are in the game as of now, so I can tell you about them individually.  First of all, there is the golden duck which allows a bunch of ducks to fall from the sky which will, more often than not, just end the round and grant you a win because it will land on everything in the map, including the pigs.  Then, there is also the frost which basically looks like a snowflake.  This will allow you to turn everything into ice so that you can use the blue bird in order to smash everything very easily because everything turns super fragile, so each blue bird will send out three other birds which will help you pop everything ice.  There is also the Hot Chili which just looks like a pepper that you can use.  You can get a random pig that will become a benefit for you.  What i mean by that, is that you will get to launch the pig which will explode when it lands on the structure, so it is almost like using an exploding bird, but you get to take one of the pigs as well.  Lastly, there is the eagle as well as the pig inflator.  These are simply board clears that will automatically get you through the stage.  Only use these when you are absolutely stuck, as in, stuck for a week kind of stuck.

Look out for the environment

With this new Angry Birds game, came a new update of environmental changes to the game which turns things into a whole new game.  There are often some wind turbines which cause your pigs to change direction in every which way as well as flowers which cause your birds to get sucked in and then shot back out in a different direction.  If you think that you can use these environmental hazards to your advantage, then go ahead and try because it is a pretty good game of trial and error where you can try multiple times and not get punished in any way for trying it out.  While you are watching out for the environment, you can also use it to your advantage pretty significantly.  You can use the pigs in order to start fighting the bosses that Angry Birds 2 has.  You can use the structures to hit the boss so that the boss will end up falling off of the stage which gives you a free win.  So while you should look out for the environment, you should also look to see how the environment can benefit you. 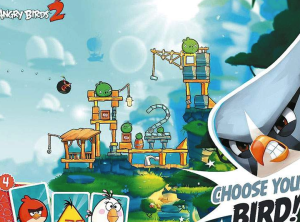 By logging in every day, you will be able to reap the rewards that the game has to offer through dedicated players.  You can gain some gems that you can use to get spells so that you don’t have to spend any real money on the game and you can simply log in every day to get additional gems.  However, if you miss a day of logging in, you will lose the log in bonus and you will have to start from square one and be miserably trying to regain that log in bonus.  So even if you don’t want to play that day, you should still log in to get the bonus that the game gives you for free.  You should also log in with your Facebook for some additional gems that you can get for signing up Facebook.  This will also allow you to send and receive a couple of gifts from friends.

Andy Debolt
Andy is a graduate of the University of Minnesota with a Bachelors Degree in Journalism. When he isn't writing Andy enjoys water sports and spending time on the golf course.
RELATED ARTICLES
Gaming