Not getting that high score in Despicable Me: Minion Rush that you always desired?  Are your friends beating you and you are just getting so frustrated that you want to quit?  You have found the right place to find out how you can increase your score significantly without having to pay a dime. Check out our top hacks, tips and cheats in 2017!

Collect as many bananas as possible 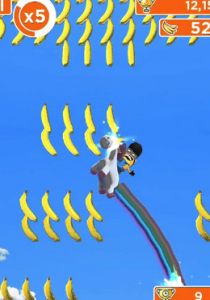 In Despicable Me: Minion Rush, bananas are the currency in the game other than the costly, paid for, Gru coins.  These bananas are lying all around the game for you to collect, even if mini games like the Unicorn power-up which allows you to go into a separate mini game to collect additional bananas.  These bananas are linked to the power-ups that you can get through the shop as well as upgrades to the power-ups and costumes that you can wear in order to get additional bananas or distance which I will explain below.

Although your classic skin may look nice and all, the outfits that you can get in Despicable Me: Minion Rush, or better known as just Minion Rush, are really effective in getting you the bonuses that you need in the game so that you can get a higher score as well as be able to afford different clothes or upgrades to your power-ups.  Using the bananas that you collect over time through completing several runs on a different outfit will help give you some kind of passive income that you will get every single time that you play so that you don’t have to be working to get that extra income.  For example, if you get the Worker outfit, you will be able to earn an additional 10% of the bananas that you collect in the first place.  So every single time that you go for a run in Minion Rush, you will earn an additional 10% which is pretty good in the long run and will earn you a lot more bananas than what you paid for it.  The Dad outfit allows players to be able to revive themselves if they knock into something the first time.  This means that you are able to continue your run for as long as you don’t knock into another object along the run.  You are only allowed to revive yourself once using the Dad outfit every single time.  So it is completely worth it by getting those additional bananas and ultimately, getting that additional score through the second life that you get using the Dad outfit.

By obtaining this unicorn power-up, you will be able to go on a separate mini game where you will have the

opportunity to tilt your device in the direction of the bananas for as long as the mini game allows you to.  You can tilt your device to collect the bananas and you will be getting a serious amount of bananas which will ultimately mean more bananas from upgrading your power-ups as well as more bananas by getting some outfits with those bananas.  Similarly, you should be getting your level of unicorn power-up to the max first because it grants you more time during the mini game of the fluffy unicorn which means that you will be able to get more bananas.  The Fluffy Rainbow Unicorn power-up is the quickest way to earn additional bananas, so obtaining it is the first priority on any run that you have during the game.  The fact that the Unicorn power-up is so effective in the amount of bananas that it can bring home makes it the most cost efficient purchase in the store, so make sure that you are upgrading that power-up first before anything so that you are always getting the maximum number of bananas in the mini game.

Be as despicable as possible 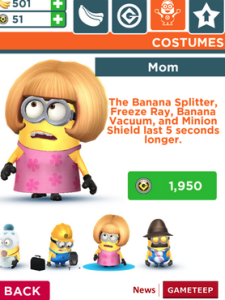 In Despicable Me: Minion Rush, there is a multiplier on the screen that allows you to measure how despicable you are being as well as how many points that you will gain for a certain amount of distance that you go.  You can earn more multiplier in Minion Rush by squashing other minions, which is pretty much running into them, or smashing obstacles using the freeze ray.  Your score will increase a good amount due to the fact that each time you do a despicable action, your multiplier goes up a little bit so that you are able to earn more points every single time that you go a bit of distance in the game.  Earning additional score multiplier is really important in Minion Rush because it is one of the main ways that you will b e beating your old score and improving yourself to your new score.  Making it from 1x to 2x is a huge difference over a long period of time and making that 9x just makes it even sweeter.

Look at what obstacles are ahead

If you are simply looking at your minion’s butt, then you are going to run into something and you won’t be expecting it.  This is because you should be looking ahead of your character and seeing what hazard lie ahead so that you know approximately how long until you need to dodge that obstacle, or what power-ups that you can get by ducking or moving to the side.  This will help keep you alive so that you can increase your score over time and collect more bananas that you might have not seen if you were just looking at your character.  This is also a good solution if you are lacking in collecting a good number of bananas every single run because you can see what bananas are available up ahead and you can reposition yourself so that you are able to collect those bananas without risking your life.

Look for the secret passages

There are several secret alleyways that the game has which are little treats for players who have a good eye for hidden pathways.  One of these pathways is known as the Disco Room which is located within Gru’s lab.  You will be able to notice it if you are always looking for additional bananas because it shows some bananas that lead up to it if you keep  your eyes peeled.  You can use this room for a little bit of different fun with more bananas for you to collect as well as maybe showing your friends what you have found which they haven’t.

How to defeat Vector

Vector is one of the several bosses that you will end up facing during your time in Minion Rush.  Although he may not look very dangerous, he will be able to end the game for you pretty quickly if you aren’t careful.  The first phase that he goes through is where he sends a couple of large objects rolling towards you.  You will have to dodge those objects or else they will send you flying and Vector will have the last word.  However, the objects that he throws at you which have a little tag, for a short amount of time, that allows you to throw the explosive back at Vector to defeat him.