GoPro Inc (NASDAQ:GPRO) Hero 4 – Should You Actually Buy It? 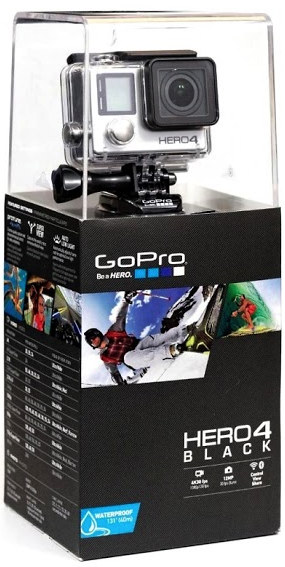 For the past few years, the GoPro Inc (NASDAQ:GPRO) series of cameras has been sweeping an untapped market; the market of tiny, powerful cameras that can be universally mounted to different objects to capture videos from unique points-of-view. The GoPro Hero line may have been the line that kickstarted GoPro’s claim to fame, and now the fourth generation of Hero cameras have arrived. 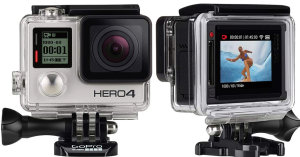 The GoPro Hero4 line includes two cameras, as per GoPro’s usual method – the Silver and Black. The Silver camera always has specifications that are a little bit less powerful than the Black’s hardware, but the Silver comes as a slightly reduced price. The Hero4 lines are both capable of recording videos up to 1080p, but the Black is able to take videos up to 1080p and 2.7k resolution. The Silver can record videos at 720p 60 fps or 1080p 30 fps, while the Black can record videos at 1080p 60 fps, 2.7k resolution at 30 fps and even 4k at 15 fps. FPS means frames per second and typically dictates the subject of the footage, with more frames being desired in action shots (think of the Mythbusters segments with the crazy high definition videos at a fraction of the speed of real life – those are shot upwards of 10,000 FPS.)

However, the Silver includes a never-before-seen feature in a GoPro; a touchscreen interface. Rather than 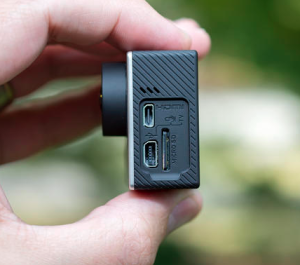 relying on small, cramped buttons to navigate the interface, the user can now simply swipe in from the right to access video settings or swipe in from the bottom to access device settings. The Hero4 series still offers support for GoPro’s official app, which allows a user to change the settings of a GoPro through a phone or tablet. Also included as a new feature for both the Silver and the Black is the redesigned battery compartment door, which allows a user to open the door on a hinge instead of disassembling a portion of the camera.

The Hero4 series shares the same dimensions as the previous line (the Hero3 line), so any housing or universal accessories will also work with the Hero4 line. However, at purchase of a Hero4 kit (Silver or Black) gets a user the camera, waterproof housing, a skeleton case, two mounts, and buckles that can attach to a pivoting arm so that a user can mount it to a helmet and freely change the angles. No MicroSD card is included, unlike previous generations.

However, there are a few downsides to the seemingly-complete package of the Hero4 series. Battery life is 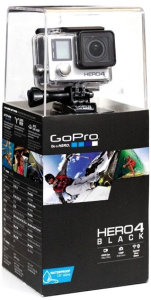 still painfully short, lasting just under 5 hours based on use. Image stabilization is a huge loss, as now even cell phones are including image stabilization features for both video and one-frame photos. As an action camera, something like image stabilization should be a high priority. The battery redesign is also somewhat of a major issue, as GoPros can be notorious for their poor battery usage – a heavy GoPro user will now have to repurchase all the batteries that they had used for previous generations.

The Hero4 line is still exciting to see the evolution of not only the camera’s specs, but the thought that goes into making the camera more serviceable still shines through. The Hero4 is now one of the most powerful GoPro models, and the successive launch price of each camera has only gone down with each release. 4K is a new feature for GoPros as well, and the footage captured even only at 15 frames per second is still spectacular. I am excited to see where GoPros evolve from here, and how this company can keep revolutionizing camcorder technology.