How Godaddy Inc (NYSE:GDDY) Came Out Of The Shadows and Tripled Its Hiring Of Women

Godaddy Inc (NYSE:GDDY) was not really popular ten years ago. One of its employees, Elizabeth Driscoll, who was there before they started taking the spotlight, was asked by her parents why she was working there.

A few months before that question, GoDaddy surprised many with their first Super Bowl commercial, which featured one of the hottest women in professional wrestling at the time, Candice Michelle. The commercial, which had men drooling, featured Candice in a GoDaddy tanktop. The move brought a lot of attention, especially from the critics who said the company was using women to boost sales.

Driscoll told her mother that a high percentage of the company’s leaders were women and that it was a great place for both genders. The commercials had her mother thinking something way different.

Driscoll explained to her many times that the commercials didn’t show what the company was really about. Her message was hard to get across but she would tell this to her mother whenever she mentioned it.

Ten years have gone by since the eye catching commercials and a lot has changed. Blake Irving took over as CEO almost three years ago and the company has changed its marketing and is now one of the leaders in recruiting women. Driscoll likes seeing what the company has become and that her message is finally getting across. 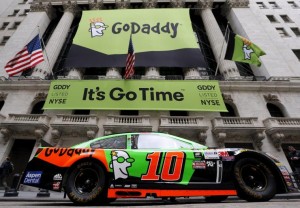 She says it’s nice to have people not working for them see what’s going on in GoDaddy. The new image and recruiting techniques have increased the amount of females. Last year, the number of women hirings was only 14 percent. That number drastically increased to 39 percent this year. One of the highest percentages, way above other tech giants.

Auguste Goldman, head of GoDaddy’s People Operations group, said recently that recruiting women is a great topic to lead on for the company.

When GoDaddy started making headlines with Super Bowl commercials like the one in 2005, few people knew them. The commercials did what they were supposed to do and the company became a big name in just a few years. According to Goldman, a study in 2012 revealed that more than 80 percent of Americans knew the brand.

The problem was showing people what they were actually about. The marketing made their name known but it was making women stay away and it didn’t show that they were a tech company. Goldman added that the marketing slowed them down as a company because it was totally different from what they actually did.

Two years ago, the company revamped its marketing and changed its commercials. The change has worked out as many women are now looking at the company differently and many now know what the company does.

GoDaddy’s changes are now reflecting what they’re about and Goldman couldn’t be happier with the new image.