Apple Inc. (NASDAQ:AAPL) will reveal the iPhone 6S in just a few days but leaks have already given us a preview of the upcoming device. With that said, some of the leaks have not really impressed or been well received by Apple fans.

Just days ago, cnBeta, a Chinese tech site, revealed the retail packaging of the phone. It looks almost the same but by seeing it we can assume that the iOS 9 will support dynamic wallpapers. A few sources spoke to 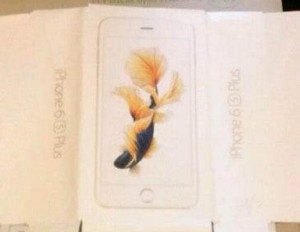 9to5Mac and said the iPhone 6S and iPhone 6S Plus will have a collection of animated wallpapers for the lock screen. The designs will look similar to the ones seen in the Apple Watch. You can see the pic provided by cnBeta on the left.

That sounds cool but the site also revealed that both of the new phones will have reduced battery capacities. The original iPhone 6 comes with 1810 mAh and the Plus version with 2910 mAh. The upcoming devices are said to be coming with 1715 mAh and 2750 mAh. Not a big drop but that’s not what users thinking of getting an upgrade are expecting to see.

Even with the decrease, Apple has said many times in the past that the iOS 9 will be more efficient than the iOS 8.

MacRumors added on to the bad news, confirming that the device will be heavier and thicker than the iPhone 6. The good news is that the difference will be less than two grams.

9to5Mac then added to the bad news streak, saying that it has a source who confirmed to them that the two upcoming devices will not increase their base storage option to 32 GB. Instead Apple will keep the same storage as the current phones of 16 GB, 64 GB and 128 GB. Apple is saving users a few gigabytes with iOS 9 so that shouldn’t be a problem.

Users will have 14 GB of storage for the 4K videos, which can easily fill up your phone after 25 minutes of recording. I say 14 GB because that’s what left of a 16 GB iPhone 6S after the iOS 9 and the apps it comes with. The pictures will also be bigger with the better camera, so that means 16 GB won’t be enough for those who are addicted to their phones.

Dutch blog TechTastic said recently that there won’t be a change in price from the iPhone 6. The blog showed just European prices, which are the same as they were when the iPhone 6 dropped last year. So the US prices will probably get the same treatment. Many experts believed that Apple, who was said to be making a stronger phone so it wouldn’t break in people’s pockets this time, was going to raise the price for the improvements made.