Is This Google Inc (NASDAQ:GOOGL) Next Phone?

Google Inc (NASDAQ:GOOGL) is planning to surprise its users with two new Nexus phones this year, and technology reviews website CNET just posted a photo of what the upcoming device could look like. According to some rumors going around the Internet, Google is planning to unveil two new Nexus phones. Both will be presented separately and will have two different sizes. One will be a 5.7 inch device and the 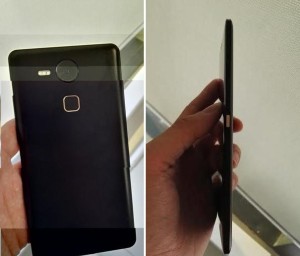 other a 5.2, for those who like smaller phones. The first device sounds like it will be similar to the Nexus 6, while the smaller and cheaper one appears to be an upgraded version of the Nexus 5 Google released two years ago. Google is known for releasing a new Nexus phone every year, but this could be the first time that the search giant brings two phones to the market in the same year. Google usually partners up with other companies to build the phone. Google partnered with Motorola Solutions Inc (NYSE:MSI) last year to make the Nexus 6 and HTC Corp (TPE:2498) for the Nexus 9 tablet. This year it will LG Display Co Ltd. (ADR) (NYSE:LPL) turn to produce the smaller phone that is said to be an improved version of the Nexus 5. The bigger model will be done by Huawei, a Chinese multinational networking and telecommunications equipment and services company. The photos revealed by CNET show an unreleased model, which people say could be the next Google device. It could also be another phone from Huawei, since the company is going to attend the IFA event in Germany next month. But some people are not sure that Google will introduce that phone since they usually do it in the month of October at their own press event. The photo does seem to match with other leaks. French blog nowhereelse.fr, which usually has accurate information on smartphones that have not been released, posted a video of the same phone from the photo released by CNET.

Those are not the only smartphones Google is working on, the search giant is also putting its efforts on Project Ara, the modular devices they say will change the way we use smartphones today. Reports earlier this year said Google was planning on releasing these phones very soon. The company has shown the prototypes in events this year, one of them was in the Project Ara Developer Conference, where the company  used a second-generation Spiral 2 prototype. In that same conference, they revealed that Puerto Rico would be the first to get modules and phones.

No one knows the exact date but there have been reports saying that the company could release it this month or by the end of the year. Another website reported that the phone could come with a $50 price tag, which would be amazing, considering that most good phones today go for over $200.

The company hopes to let users do whatever they want with their phones, and that’s what Project Ara is all about.

Are you planning on getting Google’s next device? What do you think about Project Ara?