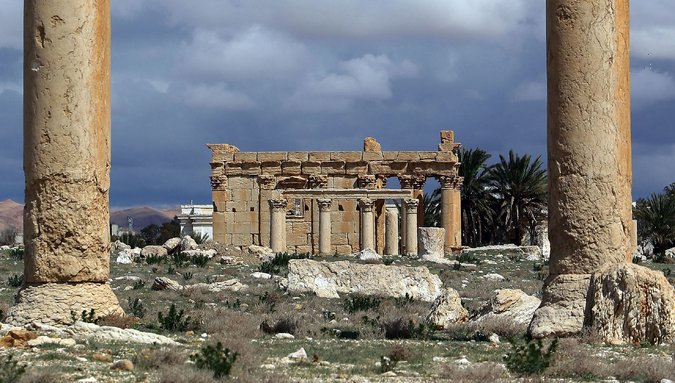 Activists and government officials are saying that the militants from the ISIS group have destroyed a temple which is in the ancient ruins of Palmyra which is in Syria. This is just yet another example of how the Islamic State has destroyed historical sites that have significant value both in Syria or Iraq.

The ancient temple was just meters away from the Roman amphitheater, which is where ISIS ended up holding a mass execution, and they killed 25 of their prisoners which was released in a video last month. The Syrian Observatory for Human Rights, which is an activist group and also monitoring group, said that there was a large quantity of explosives that were detonated there around the Temple of Baalshamin. The Temple of Baalshamin is one of the most well-preserved structures within the ancient ruins, according to the group who is based in Britian. A reporter was told by a government official that the area was damaged heavily because of the detonation of the explosives. The Temple is over 2,000 years old and was dedicated to the Phoenician god Baalshamin, and it is a sacred and very important place for people in that area.

The head of Syria’s Directorate of Antiquities and Museums,Maamoun Abdul-Karim, did confirm the account, although the accounts are a little different as to when the attack happened. The Syrian Observatory said it was last month, but Dr. Abdul-Karim said it happened just on Sunday, but these disagreements are not uncommon because of Syria’s civil war, and the often hazy nature of everything going on.

This is just the latest in all of the horrible things that the Islamic State has done in Palmyra since the group seized the city in May 2014. The group just beheaded an 83-year-old man last week who was the chief of the city’s antiquities department for over 50 years, and then the group took his headless body and put it up for all to see as a warning to others. The group last month also demolished about 6 ancient statues and smashed them with sledge hammers, and then two historical tombs were blown up in June. Syria then quickly brought as many of the antiquities as they could from the city to the area of Damascus before the Islamic State took the area over, but many archaeological items were left behind, and that includes the people too.

So you might be wondering why would the Islamic State, also known as ISIS, be smashing and blowing up these archaeological artifacts, and the answer is pretty simple when you know a little bit of the history behind the items. These are all symbols that the Islamic State believes are symbols of paganism, and ISIS says these items must be destroyed. Interestingly enough, ISIS has sold some of these antiquities in the past in order to finance some of their operations. So while ISIS does not like these items and believes they should be destroyed, the ones that are fairly expensive, the group decides to sell and not destroy as they believe should happen because of the symbolism. This is likely not going to be the last attack on these ancient sites either, because it appears that ISIS wants to destroy all of the ancient artifacts from the past that hold that symbolism they believe it does. It is unclear whether or not any more artifacts can be pulled out of Syria since ISIS basically took the area over, but if it is possible, then it will be done soon because ISIS looks to keep attacking the area for a long time to come. It is also not known whether or not there will be any more hits at this specific location, but people in the area are likely going to need to keep their eyes open because it’s possible ISIS isn’t done with this location yet.