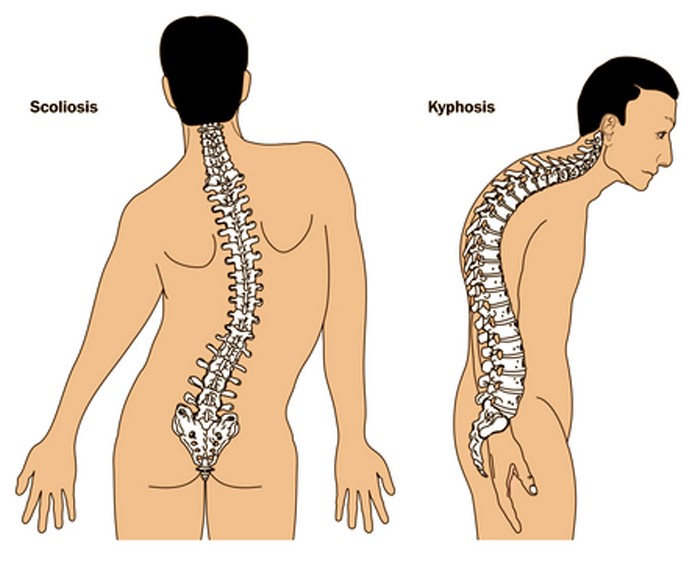 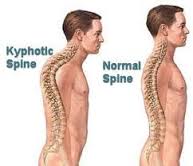 Kyphosis is a forward rounding of your upper back and might also be referred to as round back or hunchback. A little rounding of the upper back is normal but when you have kyphosis, your back is rounded more than 50 degrees. You could have a spine that looks normal if you have kyphosis or the spine could have a large hump. People of all ages can get kyphosis, although senior citizens are more susceptible to the condition. If you have kyphosis then you could have either a mild or severe form. The severity of kyphosis you have will determine what complications might develop. Kyphosis will usually come with many symptoms which should not be overlooked.

There are many different symptoms associated with kyphosis and most of them will have something to do with your back or spine. Some symptoms include mild back pain, spinal tenderness or stiffness, fatigue and a slouching posture. You might also get kyphosis and not have any signs or symptoms of the condition, which is why regular checkups are important. Kyphosis can occur in children or adults so it is important to always get a yearly physical examination. If you are not aware you have kyphosis, it can lead to serious long-term health complications. Some of these long-term complications include a physical deformity, damage to internal organs or breathing problems. These long-term complications are rare but they can occur if the kyphosis goes undiagnosed. Knowing the causes of kyphosis can help you be more aware of your risk of developing the condition.

The forward rounding of the vertebrae in your thoracic spine is what causes kyphosis and your ribs connect to the thoracic spine. Kyphosis has many different causes which depend upon the type of kyphosis you have. For adolescents or children, there are three main types of kyphosis including postural kyphosis, Scheuermann’s kyphosis and congenital kyphosis. Postural kyphosis will appear most often in adolescents and it generally progresses slowly. It is more common in girls and often is accompanied by an inward curve in the lower spine. Poor posture or routine slouching is a contributing factor to postural kyphosis, so it is important that children sit correctly to prevent the condition.

Congenital kyphosis is when a malformation of the spinal column occurs during development as a fetus. Multiple vertebrae might be fused together or it could be caused by bones forming improperly. Congenital kyphosis can get worse as the child gets older and it might eventually lead to lower body paralysis. This type of kyphosis is called congenital because it occurs during fetal development, which means children are born with the condition.

There are also many different types of kyphosis that can occur in adults and they are usually caused by underlying medical conditions. Some of the common causes of kyphosis in an adult include degenerative arthritis of the spine, osteoporosis, ankylosing spondylitis, and connective tissue disorders. The kyphosis could also be caused by infections such as tuberculosis, cancerous tumors, spina bifida and conditions that cause paralysis. Osteoporosis is a disease which thins the bones and it is associated with the fractures of the vertebrae. The fractures can cause compression of the spine which will ultimately lead to a condition such as kyphosis. Degenerate arthritis of the spine can cause the deterioration of the bones and disks of the spine. Ankylosing spondylitis is a type of inflammatory arthritis that can affect the spine and surrounding joints. Connective tissue disorders might affect the ability of the connective tissue to hold the joints in their proper position. Infections such as tuberculosis can occur in the spine which will lead to the destruction of the joints near the spine. Cancer or other tumors can press on the bones of the spine which could force them out of their proper position. Spina bifida is a birth defect in which the spine does not form properly, causing the defects in the spine and vertebrae. Conditions that cause paralysis can make the bones of the spine stiff, which is also another underlying cause of kyphosis in adults.

The doctor will ask you about your medical history and any known medical conditions and perform a standard physical examination. The examination might include some tests such as neurological function, forward bending, spinal imaging and pulmonary function. The forward bending test is when you bend forward from the waist while your doctor takes a look at your spine from the side. If you have kyphosis, the rounding of the upper back is more obvious while you are bent at the waist. Neurological changes are not common in people with kyphosis but your doctor might check for them anyway. A doctor might be looking for changes in sensation or lack-of-movement below where kyphosis occurred. Spinal imaging such as an X-ray might be used to confirm the diagnosis of kyphosis. The degree of curvature to your spine can be seen using imaging techniques as well as any damage to vertebrae. The images can help the doctor diagnose the type of kyphosis you have by visually examining the spine, vertebrae and surrounding areas. Magnetic resonance imaging might be used to confirm kyphosis if the doctor thinks an infection or tumor is the cause. Pulmonary function testing might be used so that the doctor can determine whether the kyphosis has affected your lungs or breathing abilities. Once the doctor confirms the diagnosis of kyphosis, you can then begin to develop a treatment plan for the type of kyphosis you have.

The treatment for kyphosis will depend upon which type of kyphosis you have and if it is caused by an underlying medical condition. If the kyphosis is not severe then less invasive treatment options are used, which can stop the progression of the disease. Postural kyphosis does not progress and often will go away by itself after corrective posture is used. Exercises are used as a treatment to strengthen the back muscles and sleeping on a firmer bed will help treat this type of kyphosis. Pain relievers might be used to treat the back pain and physical therapy might be needed if other options have not worked completely.

Structural kyphosis is treated in different ways depending on the age and sex of the person affected and the severity. Scheuermann’s kyphosis might just have a treatment plan of constant monitoring of the condition to make sure it does not progress. If you have symptoms with Scheuermann’s kyphosis, anti-inflammatory medications might be used to treat the pain and inflammation of the spine. Exercise and physical therapy might be needed as a course of treatment if the condition does not improve or if the symptoms persist after medications are used.

Kyphosis related to osteoporosis is treated only if pain or other symptoms develop. The condition will not progress so there is no need for treatment unless the person is feeling pain or discomfort. The doctor might prescribe anti-inflammatory medications or pain medications to help with the pain to use as needed. If the kyphosis is due to osteoporosis alone, the doctor will probably prescribe a medication for that to help increase bone density.

In more serious cases of kyphosis, an aggressive form of treatment is needed to ensure that the effects of kyphosis are minimal. Bracing and surgery are the most common forms of treatment for a severe form of kyphosis. With children and adolescents, the sooner you get treatment then the better the long-term prognosis is. If a child needs to wear a brace then you know that the kyphosis is moderate to severe in nature. Bracing will help slow or prevent the kyphosis from getting worse and might even correct some minor spinal changes. A doctor will help you determine which brace is best for your child depending upon the type of kyphosis they have. Most children with the brace can participate in sports-related activities with few restrictions. Braces might feel uncomfortable for your child but it needs to be worn as the doctor ordered or else it will not help. Once the child has developed fully-grown bones, the child can be taken off the brace gradually. Sometimes an adult will need a brace if the pain is bad enough to interfere with everyday activities.

Surgery is a last resort option and it carries significant risk since the surgery is near the spine. Surgery should only be used as treatment if the kyphosis gets worse or if other treatment does not help. Surgery might also be used if there is severe pain associated with kyphosis or there are severe neurological problems. An infant might be given surgery as a treatment option so that the spine can be corrected before it can cause any long-term problems. Surgery is used to help reduce the amount of curvature in the spine and is done by fusing vertebrae together. A general anesthetic is used while the doctor makes small incisions in the back and then fuses the affected vertebrae together. Surgery will also require pins, hooks, screws, wire and metal rods to be placed in the affected area. The metal will remain in your body even after the vertebrae have fused together for support. Sometimes people feel worse than before after having the surgery performed, so it is not a guarantee that it will help relieve the pain. Complications from the surgery include bleeding, infection, nerve damage, pain, arthritis, disk degeneration and even paralysis. Even if you choose to get treatment for your kyphosis, you might have long-term health complications.

Some complications might occur with kyphosis even after treatment, which is something that can make this disease very serious. Complications include deformities, body image problems, breathing difficulties, neurological problems and persistent back pain. A child has the most risk to develop body image problems associated with kyphosis and it can be devastating to them. The hump on the back might be permanent and the pain in your back could become overwhelming and debilitating. Breathing difficulties can occur in the more severe cases of kyphosis, leading the rib cage to press against the lungs. Neurological problems such as leg weakness or paralysis are rare but they do occur in some people with the disease. Someone with kyphosis can expect to live a fairly normal life with a better prognosis if treatment is started early in the disease. Pain is something people with kyphosis most often have to deal with long-term but can be managed using medication. The most important aspect to remember about kyphosis is that early detection is vital for a more favorable prognosis.