Ledge Pillow Update – Find Out What Happened After Shark Tank 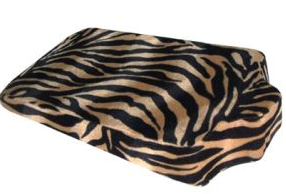 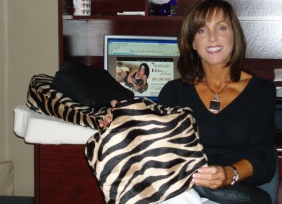 Amanda Schlechter, a West Palm Beach, Florida resident and successful attorney, put down the law books in order to pursue her dream of running her own company. The vision for her business all started out several years ago when she began to find it extremely difficult to sleep on her stomach after having a breast augmentation. At first Amanda attempted to remedy this issue with additional pillows underneath her stomach or folded up towels, but nothing seemed to offer her any sort of relief. So, instead of just calling it quits and rolling onto her back, she decided to create a pillow specifically designed for stomach-sleepers with sensitive breasts. Schlechter patented Ledge Pillow in 2001, but continued to go through trial and error experiments with the design and material for the pillow.

Managing her career and family made kickstarting her business quite difficult, but the mother of two finally launched Ledge Pillow in November of 2008. Amanda received a variety of orders across the country, but most of her sales came from California. People began to praise her for her product. From women who had also undergone breast augmentation to breastfeeding mothers, they all had something positive to say about her new pillow. She was also struck with the idea to produce a vinyl pillow cover for her customers who used it during massage appointments so that the oils would not stain or ruin it.

Amanda managed to run her company for 3 years before she finally began to struggle with it financially. With only the most basic of websites being used to sell her product, she wasn’t getting the proper advertisement and funding that she needed. As desperate attempt to save her business, Amanda went to ABC’s Shark Tank to hopefully get the money she needed. 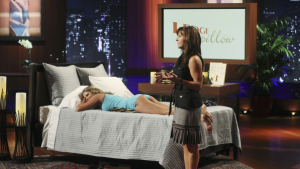 Schlechter beings by asking for a $30k investment for 25% of her company. After stating her beginning price, her assistant goes around to each of the Sharks and gives them all a pillow to touch and feel for themselves. While they are examining the product, she starts to explain how the Ledge Pillow is specifically designed for women who sleep on their stomach and have sensitive breasts. The Sharks all begin to laugh uncomfortably as the assistant lays down on a mattress to demonstrate how the pillow works. Kevin O’Leary sarcastically chimes in saying. “who knew we had this big problem” and Lori Greiner asks to hear the percentage of women who have breast implants and the cup size of a woman who would benefit from the pillow. About 5-10 million people have had breast augmentations and a C cup or higher would find comfort in the pillow.

When asked about her sales, Schlechter bashfully confessed to only having sold 83 pillows, which visibly stuns the Sharks. In an attempt to justify her low sales, she tells them that her website only opened in 2008, but that proved to be a mistake because they were still astounded that she only sold 83 pillows in three years. Daymond John asks her how many big-breasted women actually have this problem because, due to his own experience, most women that he encountered slept on either their backs or sides. He also questions why a regular pillow wouldn’t remedy the problem. According to Amanda, normal pillows do not have the proper angle or foam needed for comfortable sleep. Mark Cuban then points out that even though it is good that she has a patent on her product, having such low sales is definitely not a good sign.

In a final attempt to persuade the Sharks to sympathizing with her, Amanda chalks up the poor sales to a lack of time and money because she is only a single working class mother. No one seems all that convinced. Lori Greiner speaks up first to say that she admires Amanda’s ingenuity but fails to see how the Ledge Pillow will appeal to a large market. Following her comments, O’Leary bluntly states that she has already sold her product to 100% of the market because she set herself up for failure by creating a product for an extremely small population of people. He is the first to pull out, followed by Greiner, and then the rest of the Sharks as well.

Since leaving Shark Tank there hasn’t been many updates on Amanda or her business. Ledge Pillow did have its own website and she did receive some comments after the airing of the show, however, it has been taken down. In addition to the discontinuing of the website, there has not been a post on the Ledge Pillow Facebook page since March of 2012.  For a moment there appeared to be a chance that the business could be successful when the company received some attention because of her appearance on Shark Tank, but like the Sharks said, Amanda just did not have the initiative to keep up with it.