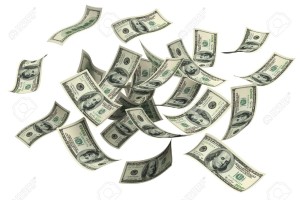 The huge $2.1 trillion loss comes as there are new fears coming through investors and experts who are saying the world economy is going to suffer from the economic slowdown in China, which is getting worse every day. The Dow, Nasdaq, and S&P 500 have all been put into correction territories, which is the first time since 2011 there has been a 10 percent decline from the high. In terms of how to gauge the American economy, most people use the S&P 500, which is the best barometer for measuring the companies in the United States, and it has lost trillions in market value within six days. The value of the losses is combined in market value to Apple, Google, Berksire Hathawat, ExxonMobil, Facebook, Walmart, and 21st Century Fox. You could also say it would be like erasing nearly all of the value associated with the S&P BMI UK Index, which is the British version of the American S&P 500. The British version is actually worth $2.8 trillion.

The stock market has been going through flashbacks of previous financial crises according to Merrill Lynch chief investment officer, Christopher Hyzy. The Down also went into an unprecedented 1,089 point decline just within a few minutes of opening bell on Monday, and almost all 2015 gains have been wiped out as well as almost all of 2014 gains too. The biggest issue on Wall Street is China, because the economic slowdown has more meaning than what some people think. While a lot of people already knew that the economy in China was not as good as it was, investors are looking at the immense slowdown as a sign there is even more behind it than just a bad time. Earlier in the summer is when China’s economy began to implode and it was not clear at that point whether it was a stock market bubble or whether it was deeper than that as far as a bigger issue with China’s economy. China’s stock markets then devalued its currency, which is the yuan, which happened about 2 weeks ago. Experts said that this seemed like a desperate move by China in an attempt to help boost exports by making the goods cheaper to the foreign buyers. Then last week, China’s manufacturing activity just took a nosedive to its lowest level since the beginning of the global financial crisis. This was also combined with the effect of the Chinese stock market being down more than 40 percent in just the past couple months.

Merrill Lynch is saying that the equities in the United States are still vulnerable, and the stocks have been breaking down below the key levels, and the momentum stocks have been tumbling. Even though the stock market seems to be nosediving, so far the American economy has not, and Barclays even boosted the tracking estimate for a third-quarter gross domestic growth to 2.8 percent. If you are looking for a sign that the United States is in a recession, that is definitely not a sign of one, and it’s actually a sign of a pretty good recovery. The economy does not seem to be collapsing at all, and the central banks are flooding the system with cash to help keep the interest rates low, which is a good sign too.

There are a lot of things in America going on right now that make it seem like the economy is doing well, although it is most likely the interest rates won’t be going up until sometime in 2016 at this rate, but there still needs to be a decision by the Federal Reserve about the issue. There is concern though because crude oil prices are dropping quite a bit, to under $40 a barrel, which some say is a sign that the energy sector is still really week, especially since there have been a lot of jobs lost over the past year. Only time will tell whether or not China’s economic issues will really send America into a tailspin, but it seems like America is trying to rise above that, but China does have the second-largest economy, which means it’s hard to stay floating above when China is starting to sink. Either way, the amount of money that has been lost on Wall Street in the past week is simply amazing, and it is even more scary to think that all of 2015 and 2014 gains have been basically all wiped out.