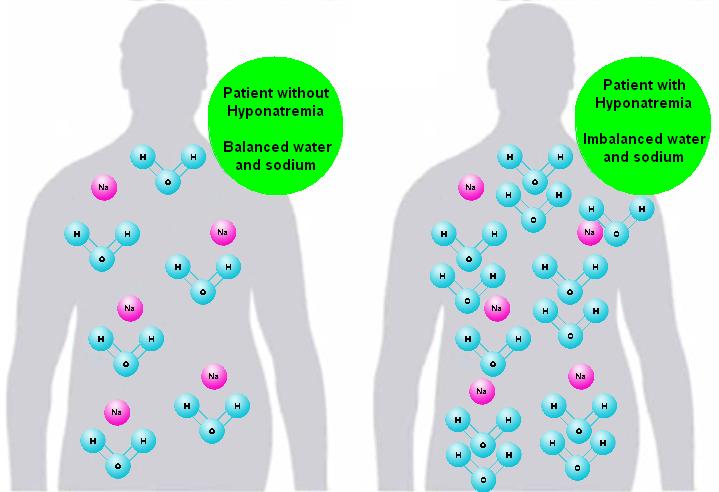 Becoming involved in sports can be a great way to promote healthy living, but you always need to stay hydrated. Some athletes however, do not realize that you can become too hydrated, and this can be just as bad for your health. Hyponatremia is the medical term that is used to describe when you become too hydrated, and is also referred to as water intoxication. As an athlete, it is important to watch how much water you are consuming, due to the horrible symptoms that can occur as a result of hyponatremia. Here is an overview of hyponatremia, along with symptoms, and what an athlete should be watching out for. 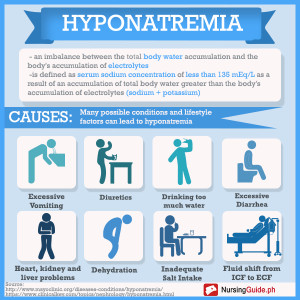 Hyponatremia is basically when you consume too much water, and occurs most often in athletes that are trying to stay hydrated during physical activity. Hyponatremia can occur in people who are not involved in sports however, although most people who are unactive will find it harder to consume the levels of water required to end up with hyponatremia. It is important that whether you are involved in sports or not, that you are not taking in too much water, because while you might not think it is a serious health risk, you could actually end up in a life-threatening situation. You hear a lot about staying hydrated during sports, but you do not hear too much about the negatives related to water consumption. When you sweat during physical activity, you throw off the balance in the body between blood and sodium, which is essential to stay hydrated properly. A lot of athletes are under the impression that drinking water after a physical activity is the best way to keep hydrated, but the sodium being lost in the body is not being replaced with this method. Those athletes that drink water after a physical activity are most at risk for hyponatremia, because they are drinking too much water trying to replace the sodium lost through sweat.

Sweating decreases the amount of sodium in the body, and there is a special balance needed in the body to thrive properly. When you work out and produce sweat for prolonged periods of time, this balance becomes out of whack, and the athlete will have decreased sodium levels in the body. Drinking water does not produce the sodium that an athlete will need to replace what was lost during physical activity, and it can lead to water intoxication. The bloodstream of the athlete will become diluted with water, instead of being filled with the needed sodium, and this can lead to hyponatremia. Sodium levels in the body are responsible for many different bodily functions, including sending nerve impulses, and muscle function. An athlete needs to keep this balance during a physical activity, and after a physical activity, to maintain proper bodily functions.

How to treat Hyponatremia

When you begin a sport, you should always keep drinks around that contain sodium, such as Gatorade. Before, during, and after a sport, you should not be consuming large quantities of water, and instead should limit it to just small sips here and there. The only way to treat hyponatremia is to increase the amount of sodium levels within the body, and eating salty foods can help increase those depleted levels as well. You can also treat hyponatremia by planning beforehand and having numerous sodium products available, such as putting some peanuts in your pocket to munch on during the event. If you are someone who is involved in sports, you can also drink sports drinks, since those contain a lot of salt, and this can help improve your salt levels and get them back to normal. It is important though that you should not be consuming the sports drinks unless you are involved in sports due to the high levels of sodium that drinks such as these contain, but if you are depleted on salt, then this is a great way to boost your levels back to normal.