Not getting that high score that you always wanted?  Or are your friends surpassing your score by two fold and you don’t understand why and how they’re able to pull it off?  This type of game, which is similar to Temple Run, has all of the components of mechanics and positioning that is hard to get a grip of until you are told.  So keep on reading on in this article and you will discover the hidden tricks and tips that will help get you farther into the game and score more points in 2017.

Live with the birds 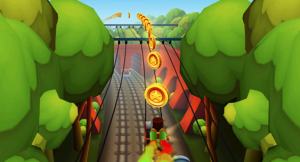 I don’t mean actually live with the birds, but rather try and stay up as high as you can in comparison to the ground level.  The ground level where the tracks are, and not the trains, consist of the hazards and obstacles that will often trip you up by mistake and get you very frustrated and annoyed.  A lot of the obstacles that you will see in Subway surfers are on the ground so staying up high on the trains will mean that you will face fewer obstacles, but it also means that you will have to keep on jumping from train to train or searching for the best train that is out there.  I also don’t mean to stay on the trains forever because there are specific game bonuses in the game like power-ups that are definitely worth going down to the tracks for because they will get you farther in the game than anything else.  So it will give you the best chance when it comes to surviving for the longest time.  It will also get you farther in the game because you will be able to use a diagonal movement mid air which also gives you more options when you are actually in the air and will allow you to be more versatile in how you are able to avoid the obstacles in the game.  For example, if you find yourself about to bump into something mid-air, you will be able to dodge it by quickly swiping from one side to another so that you can do a mid-air jump away from the obstacle and be able to continue your run.

Use the best hoverboard

The hoverboards are basically just a special power-up that will give you the ability to ride a hoverboard for a certain number of time that will allow you to stay up for an upwards for 30 seconds if you dont’ hit anything in the way which will end your ride in the air.  There are some hoverboards which are better than others and some are just better looking than others.  So you should buy the hoverboards so that you can use the best hoverboard to get you as far as possible unless you simply want to show your friends what cool hoverboard that you have.  So the best hoverboards that you can get are the bouncer or the lowrider hoverboards.  These will let you do some extra abilities that will help you get away from the obstacles in the game.  For exale, the bouncer hoverboard allows you to use a super jump which will allow your jumps to go much higher than the regular hoverboard and it is pretty much the same as having super sneakers which allow you to jump higher than usual in comparison to your regular sneakers.  Then, the lowrider hoverboard allows you to be as low as possible so that you don’t have to duck when a obstale comes near you which you would normally have to duck underneath.  They don’t really help that much but they can be useful on occasion but are not worth the extra money and you should rather stick to getting upgrades on the better power-ups which are available.

Know which power-ups give the most 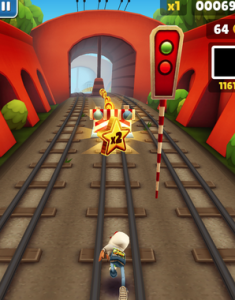 looking to get the absolute best score that is possible.  If you are looking to simply get enough coins to afford different hoverboards or get some upgrades on your power-ups the coin magnet is the best power-up that you can get.  The Jetpack allows you to fly around the course and gain a ton of distance while also being able to easily avoid the obstacles that come in your way.  The 2x multiplier is exactly as it sounds like.  It just doubles the amount of score that you would get otherwise.  It is really good if you are trying to get a high score compared to your friends, but in terms of distance, it does not help at all and it isn’t worth putting your life at risk for.  You should know what power-up that you are risking yourself for.  If you are risking it all for a jetpack, it could be worth it because you would simply avoid the hazard right up ahead, but with a coin magnet, it would not be worth risking your run if you were going for a new record.

The move combinations in this game are not complex at all, but they can be very useful in avoiding some hard situations.  For example, you can jump and the swipe right in order to make a move to the right while in mid-air and if you are at the farthest left end, you can swipe twice to double move to the farthest right lane while also in mid-air.  This will allow you to be more mobile when it comes to trying to get away from hazards when you’re in the middle of the air.  The other move combination is to cancel your landing or cancel your roll so that you are wasting less time doing the action.  So to do this, all you have to do is roll and then immediately jump or jump and then immediately begin the rolling.  This will cancel your initial action and do the next action immediately after the first one is done.  This can save your life really often but it is a pretty hard tactic to pull off cleanly.

Use the time that you can set your device to, to your advantage

If you are beginning to play the game, collect coins

Coins are the best way that you can continue to earn enough money in order to afford some additional power-up upgrades or different hoverboards that you can use to your advantage.  Collect as many coins as you can while also trying to stay alive because this will earn you a ton of coins and if you don’t need coins anymore for upgrades, you can simply just focus on staying alive so that you can rack up more points.