A study, known as the Utah Better Identification of Germs-Longitudinal Viral Epidemiology study, has shown that each child you have in your household increases the risk for infections with viruses that cause colds, flu, and other illnesses of the respiratory system. This study was conducted by scientists at the University of Utah School of Medicine, and was named the BIG LoVE study for short. 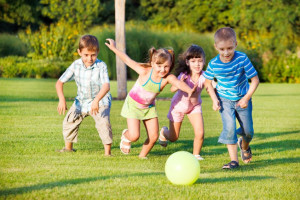 In the study, researchers found out that people who lived in childless households were infected with viruses about 3 to 4 weeks during the year, but just having one child  increases this to 18 weeks. If you have six children, then there was a virus in the household for 45 weeks out of the year, and remember there is only 52 weeks in a year. On average, only about half those that tested positive for the viral infection had the symptoms that were typically associated with it, such as coughing, runny or stuffy nose, and fever. The results of this study were just published in Clinical Infectious Diseases, and it really shows just how long children end up having viruses without even showing symptoms, and that explains why various family members get sick at different times even if they are in the same household.

You might be wondering why households with more children have more illnesses, and this study shows that young kids are to blame. Children younger than age 5 had at least one virus detected in their nasal mucus for half the year, which is twice as often as older children and adults. When the kids were infected, they were 1.5 times more likely to have the symptoms, such as severe wheezing and a fever. The parents of these children were also 1.5 times more likely to get sick compared to the people who did not have young kids living in their household. Co-first author of the study was Carrie Byington, who is a professor of pediatrics and co-director of the Utah Center for Clinical and Translational Science. Byington said that some of the kids monitored had symptoms for 20 to 25 weeks in a row, which means that they could be getting sick every couple weeks with some sort of illness. This BIG LoVE study is one of the first studies using modern diagnostics to track just how often the kids and other family members in the household have nasal infections of a respiratory virus. There will be upcoming studies that will determine whether or not the same results occur in a larger populous. This study was just a year-long survey in a community in Utah, so the results might or might not be valid in a larger more diverse population across the country.

A very interesting part about this study was that it showed just how often someone could be carrying a virus without showing signs of being sick. Participants in this study were having samples collected using PCR-based diagnostics, which are becoming a more common way to diagnose patients, and it is becoming more common in a clinical setting. PCR-based diagnostics are more sensitive and accurate when compared to the older tests, and also provide the results within hours as opposed to days. This study does though suggest that the results of the tests should be interpreted cautiously, since a positive test does not indicate a positive sickness. The study participants that were infected with influenza and parainfluenza were sick a majority of the time, but the participants who carried the rhinovirus, which is the common cold, were only sick about half of the time.

The results are suggesting too that a patient who is recovering from an illness might still be carrying the virus for weeks afterward. For instance, Bocavirus persisted in the nose for up to 12 weeks, even though the common viruses only persisted for 2 weeks or less. While this test does pick up a lot of the diseases and viruses, there are rare diseases that might not be picked up with the test, and certain bacteria might not end up being detected with the test. The researchers say that the healthcare providers should be aware of this when administering the test, because there are limitations to it, and it is not going to find all illnesses.

In this particular study, investigators monitored 26 households which made up of 108 people all together, and the researchers studied them for a year. Each household collected nasal swabs from family members once a week and then documented when they had the symptoms of a cold or flu. The PCR-based test then probed the swabs for 16 different respiratory viruses, including rhinovirus and influenza, and overall 4,166 samples were analyzed. In the future studies, researchers will look at trends in both larger communities and geographical regions, and also look at trends in people coming from different ethnic backgrounds. This study does help put into focus just how bacteria and germ filled children really are, especially in their noses, and it’s something that you should keep in mind when thinking about having a big family. Remember, while one kid increases the odds of viruses in the household, you increase your risks with every other kid you have.

Although this study was done in households, you can basically use your imagination to think just how many viruses are going around where there is a large gathering of children, such as in a daycare or school, and it’s no wonder schools have to shutdown once a virus begins going around.