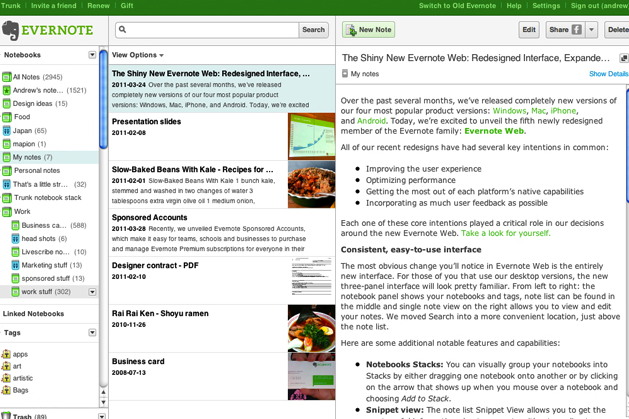 As smart technology has become more popular, the act of writing notes or making to-do lists on physical paper has quickly declined. Companies such as Post-It have suffered a massive impact on their sales and have had to quickly evolve to stay current and competitive in the market. Many competitors to Post it have risen as keeping notes digitally has became more popular. Two of the biggest apps that offer this service are Wunderlist and Evernote, both of which I have used for various reasons, ranging from organisation to reminders and shopping lists. Both of these apps are great in their own way but they also offer things that the other does not. Hopefully by the time you have reached the end of this article you will know which one is right for you (or if good-ol paper is best). 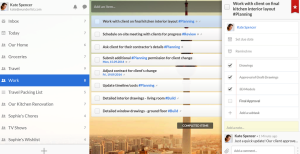 One of Wunderlists main features is its simplicity, but also its complexity. For the newbie to digital postits and digital task managing the switch from paper to digital may seem like a daunting thing but wunderlist seems to make the transition seamless and easy. If you want you can make a list, order it and tick things off without even going into the complexity of alarms, due dates, repeat dates or sharing their list. However for the veteran, the organisation god, Wunderlist offers a plethora of features to help you fine tune your skills. From using Hashtags (the annoying things that seem to be everywhere these days) to categorize your lists, folders to aid in the organisation and the ability to add subtasks or comments to offer guidance or motivate yourself to do them.

With Wunderlist sharing is as easy as pressing share and entering their e-mail address or wunderlist username, you can choose whether they can edit the list, tick tasks or just view it. This comes in extremely useful because it means that you can create a single list and share it with every member in the family, for example a list of chores that need to be done by the end of the day. Another great example I read about is how a man and his girlfriend created a shopping list and share it with each other, if either of them need anything it is as simple and typing into the list and the other one can see it, and of course all your lists sync wirelessly to all your other devices despite them being a mixture of android, ios and windows (PC).

Overall Wunderlist is a solid applications with many positive things going for it. The extensive number of features makes it a great option for a transition from physical to digital or even a great option for the die hard digital users that are looking for an upgrade in functionality or just a new experience. Finally some integration options such as the ability to link the app to dropbox or your calendar blows most of its competition out of the water, but not evernote.

Evernote is very similar to Wunderlist in the way that it is a note taking and organisational program,however 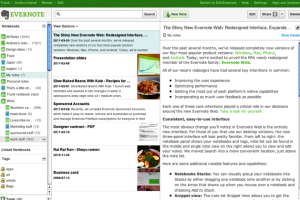 Evernote comes in three different forms, a lite version, plus version and an unlimited version. The Plus version gives the user a limit of 1gb upload limit for pictures and notes and it also lets you view your notes offline on a mobile device. Unlimited gives the users an unlimited amount of upload space, faster word recognition from photos (converting physical notes to digital) and PDF annotations where it is possible. Evernote, very much like Wunderlist, also lets you take notes in the standard form and make checklists, however, Evernote also lets you take notes in the form of: photos, voice memos, web pages, extracts from webpages. The fact that evernote offers such a large list of different forms of notes when compared to Wunderlist does give it a small advantage, as when we are all in those moments where you do not have time to write down what you need, taking a picture or just speaking to your phone is much quicker and easier than typing out a note, especially if you are pressed for time (or are just being straight up lazy).

Again just like Wunderlist you can share your Wunderlist notes, no matter your membership status you can share notes with any other member, however, free users will not be able to edit PDF annotations like unlimited members. Furthermore Evernote has a second tier of notes called notebooks, these act like folders where you can store your notes. Notebooks can be shared with all of your notes inside meaning you can share a lot of notes at once, the owner of the notes can decide whether the people they shared it with can edit or just view the notes making it convenient to share between only a few people who can edit the notes or bigger companies can use this to share the notes with hundreds insteading of using memos or e-mail around the office, which makes it very easy for managers to communicate with their employees.

All in all I thought that both Wunderlist and Evernote are great pieces of software that have massive potential to be rid of physical notes and while both have their advantages, Wunderlist being their alert and repeat system and Evernote’s’ strength being their massive cap on notes (100,000 notes) and their ability to take notes in the form of photos/ voice memos. I would say that if you aren’t prepared to pay for your note taking and want a great free alternative then Wunderlist would be more than enough for you and their ability to share notes with another person is a great feature when paired with due dates as you can set tasks for your family and a date for them to be finished for. If you are prepared to pay for your note taking service then Evernote is an amazing application. Its voice and photo notes are a life saver and have saved me multiple times, while you can use this as a free version it is quite limited unless you pay so I would strongly recommend this and definitely think the $45 a year is worth it for the benefits. Finally if you are a small-mid sized business then Evernote is definitely for you. Its feature to share whole notebooks is very useful in getting messages to employees and setting up a “newsletter” to help keep your employees in the loop.