If you read the business section of the newspaper (where this article lives), you have heard of the Fed Funds Rate.  You may be slightly less familar with what it does: regulate how much banks pay each other to borrow each other’s money overnight.  You have also been told, over and over, that raising the funds rate will cause the stock market to suffer some doom or other.  I’m not going to dispute their analysis (directly), or figure out whether, or when it will happen.  Instead, I’m going to figure out what rate changes do to stocks in the shorter term, and help you figure out how to react, investment-wise.

Which Fed Funds rate do we want to cover?  The Fed sets, with their quarterly meetings the “target fed funds rate”.  They then do “open market operations” to push this rate up and down.  In other words, they push a button and the bank’s cash balances go up or down.  Since they have to have a certain amount of cash on reserve with the Fed, this change in the cash they have on reserve means they have to deposit more money with the Fed, or get to take some out.  So, where are we now?

So what does follow the Fed Funds Rate?  Do stocks?  Let’s find out.  First up, we plot companies that have lots of are paying lots of interest versus those that are paying none.  If the Fed Funds rate immediately impacted those with lots of interest payments, then we should see them move in the opposite direction, as investors panicked at the sudden loss of balance sheet strength, and ran for the hills.  The companies paying no interest should either do nothing or go up as interest rates do.  So, what really happens?  We’ve backtested the companies with the top 25% in interest expense relative to market cap, rebalanced quarterly, restricting ourselves to non-ADR’s (US companies should be most affected by the Fed).  We also insist on a $1 billion market cap, so as to hew to more traditional stocks and away from oddballs and penny stocks.  And the results are — drum roll —

The last question I had on the Fed was whether interest rates affected small companies more than big ones, or vice versa.  So, I broke the stock universe into 4 categories, completely arbitrarily.

Again we exclude ADR’s.  The results are below, along with a tab showing how the query is built in Equities Lab. 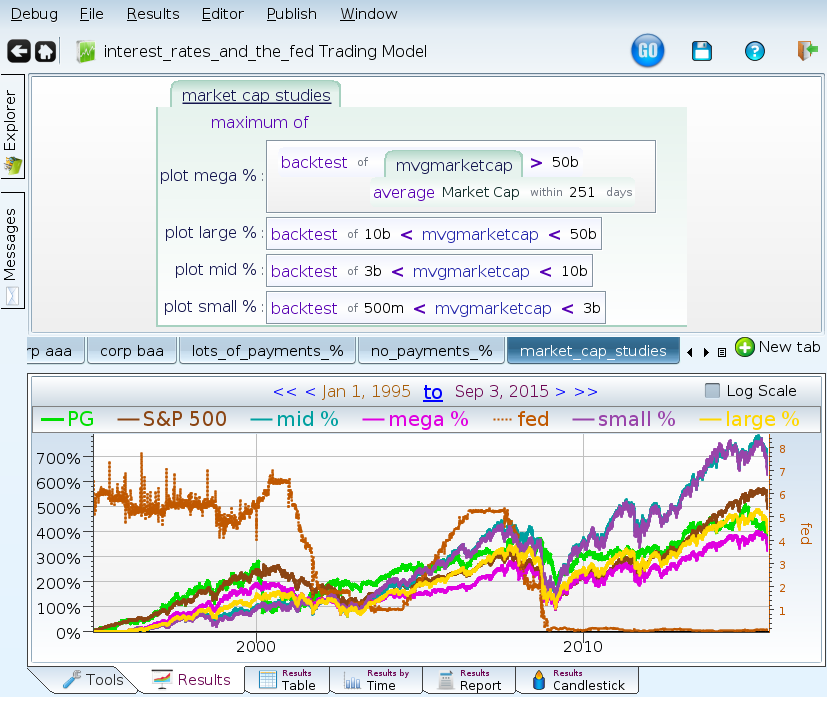 Note:  All the charts in this article were created with Equities Lab, which uses Morningstar fundamental data.    Quandl supplied the statistics about bond yields and the Fed Funds rate. Quandl, in turn, uses FRED as the primary source for this data.