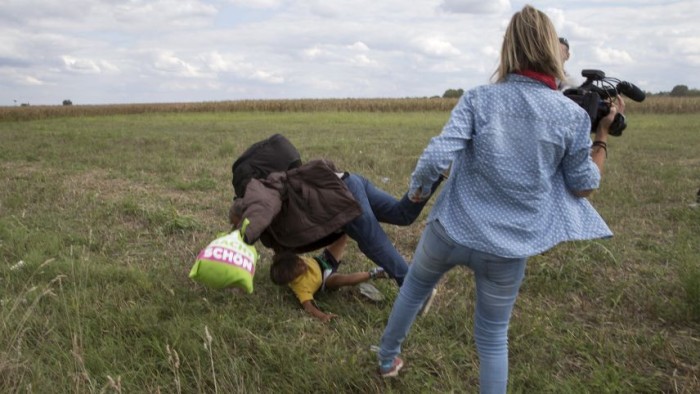 A camerawoman who angered the world after being caught on film kicking refugees as they fled police apologized. The woman also said she received numerous death threats after the incident.

Petra Laszlo wrote a letter to a newspaper and said she panicked, and that she is not a heartless person. She says she has watched the footage numerous times and regrets what she did.

In the stunning footage, which spread all over social media, Laszlo, 40, can be seen tripping a man who was running away with a child in his arms. In another part of the footage, she is seen kicking another running child. The incident happened close to the town of Roszke, which is right next to the border with Serbia.

Her contract was terminated just hours after the footage was revealed. She was working for N1TV, an Internet based television station. She is now facing criminal charges for breaching the peace.

Authorities detained her on Thursday and released her a few hours later. 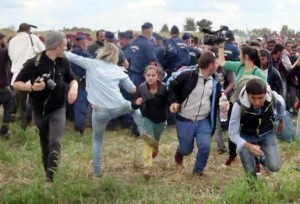 In the letter, she also says it took her time to give her side of the story because she was in a state of shock after what she did and what happened to her hours later.

Laszlo says she panicked when all the migrants started running after they got past the police officers. According to her, it all started when one of them ran into her. At the time of the incident, the area was packed with hundreds of migrants waiting to get through.

She added that she was so afraid when the hundreds of migrants started running towards her that she felt she was going to be attacked and just thought of defending herself.

Her act was seen all over the world and many had something to say on social media after the footage was revealed. Laszlo regrets doing all of this, especially what she did to the child because she is a mother.

Those who were bothered by what they saw in the video made a Wall of Shame page on social media. In there, people around the world have posted pictures, videos and commentaries about the incident. One user commented saying she is a disgrace to her profession.

Laszlo regrets doing this but said she did not deserve the political witch hunt and the numerous death threats. She finished her letter by saying that she is just a woman, now unemployed, who made a bad decision.

She had worked as a camerawoman for 20 years but all it took was a short video to get her fired. The footage is still being talked about today even though it’s already been almost three days.

Hungary has become an entry point for the thousands of migrants who want to cross over to other countries. They have said in the past that they’re against mass scale migration and are currently building a fence, despite the criticism from other European countries.