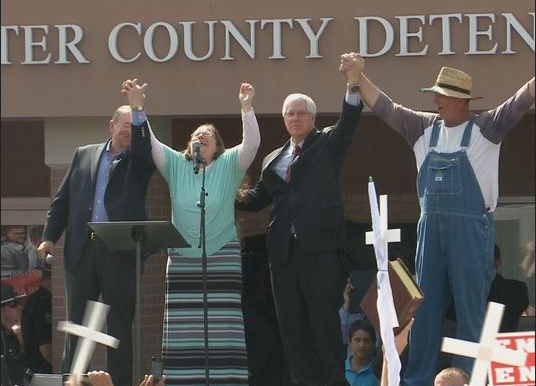 The Kentucky clerk who has gained national and international attention after failing to issue same-sex marriage licenses within the state has been freed from jail after being held for contempt of court for five days. 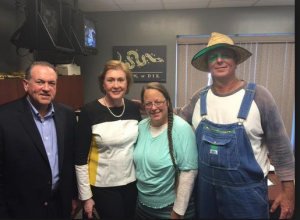 Kim Davis got out of jail this afternoon, broke down in tears as she left the jailhouse with a crowd cheering her on outside of the court house. Davis spoke and urged her supporters not to give in, gave glory to God, and thanked everyone for their support and love. She went onto say that He’s worthy and He knows exactly where everyone is at and they are serving a living God. This is coming from a woman though, that it has been noted she has also been divorced three times, married three times, and also has had premarital sex as seen by the fact she had two children out of wedlock. The children outside of marriage and the number of divorces Davis has gone through have been a point for opponents of hers, saying that she is a hypocrite and also apparently, not quite as “religious” or good as she claims to be, thus she should not be throwing stones so to speak.

Davis said that if she issued the marriage licenses to the same-sex couples, she would be going against her religion and she would be violating her conscience by going against God. Davis said she plans to go back to work at the Rowan County, Kentucky, Clerk of Courts this week, and she is not going to resign her position, according to her attorney Mat Staver. When a reporter had asked Davis whether the time in jail was worth it, Davis just smiled and nodded yes. Davis did not speak about the case directly however, which could be due to her lawyers filing an appeal to the 6th U.S. Circuit Court of Appeals. The judge, U.S. District Judge David Bunning, did say that she could be let out of jail but under one condition, which was that she cannot interfere with her deputies issuing the marriage licenses to all of the eligible couples, including those of the same sex. Bunning released Davis because he said he was happy with her deputies because they were fulfilling their obligations to give the marriage licenses to the same-sex couples in her absence.

The little caveat that the judge gave Davis in terms of she cannot interfere with her deputies when she does go back to work begs the question, what will Davis do once she gets back to work? If Davis does anything at all to hinder or try to stop the deputies from issuing the marriage licenses to the same-sex couples, she again could be put back in the slammer for contempt. The judge made it pretty clear to Davis before she was freed that he is ready and willing to let her go back to jail if she disobeys his order of staying out of the way when it comes to her deputies issuing the marriage licenses.

Davis has previously stated she will not authorize those in her office to issue the marriage licenses to the same-sex couples if her name is still on the certificate. Bunning did not mention in the order about revising the licenses to take Davis off of the certificate, even though Davis said that there will be no licenses issued to the same-sex couples if the certificates have her name on them. Staver, one of the attorneys for Davis, said that the judge did not resolve anything, since the judge did not comment on taking her name off of the certificate, and said the judge could simply order that to fill the request of Davis, and then there would not be an issue moving forward. Staver did not comment directly on whether or not Davis would try to stop the same-sex marriages from happening in her county when she does go back to work, although it is not known what day she is expected to head back to the job. While Davis was in jail for five days for contempt of court, which was for violating the law of not issuing the marriage licenses to same-sex couples after the courts repeatedly told her she had to, her deputies did issue those marriage licenses in her absence.

When Davis got out of jail, she was met by her husband, attorney, and presidential candidate Mike Huckabee. Huckabee has been a strong supporter of Davis throughout the ordeal, and he introduced her to the crowd of supporters outside. Huckabee has also been linked and supportive of Josh Duggar, one a reality star who has been in the news for molesting his sisters and other young girls when he was 15, and most recently, Duggar was involved in the Ashley Madison hack. Duggar had paid the website $250 for the membership which guaranteed an affair within three months and he also came out to say he had a porn addiction in addition to cheating on his wife with numerous women, including porn stars, and did not use condoms. Huckabee was supportive of Duggar throughout the scandals, even saying Duggar “made some mistakes” when he was younger, with Huckabee claiming that did not make Duggar a bad person. Huckabee made waves with the Davis situation when he said before she got out of jail on Tuesday, if someone needed to go to jail over the marriage license situation, then he would take her place. Huckabee literally was begging for him to be in jail instead of Davis, saying if that is how freedom is best served, he would gladly go to jail on her behalf.

In terms of Davis, she is still ruffling feathers though, even as she literally walked out of the jail, because she was using “Eye of the Tiger” which is a song by Survivor. The band said that Davis and her Republican friends had no rights to use that song and the band wanted Davis to stop using the song immediately because she did not get permission to use the music, and the group does not agree with Davis. This is basically the same situation that happens to politicians when they use songs on the campaign trail that was not authorized by the group or artist beforehand. Senator Ted Cruz had also went to Kentucky to meet with Davis, although he was not part of the crowd of supporters outside of the courthouse when she was let out. For now, it is unknown what Davis is going to do, although it seems reasonable to think she will again try to stop the marriage licenses when she returns to work if her name is still on the marriage license certificate. Her name could be taken off of the marriage licenses, along with other clerks in the state, but there will not be a special session to vote on this, which means it won’t likely happen until January 2016.