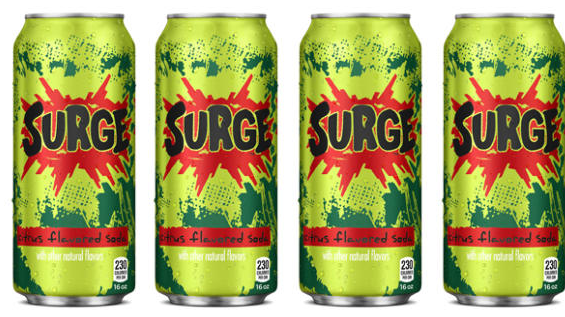 Good news coming out of the soda world tonight, as it was announced Surge is coming back to the store shelves. Coke brought back the popular 1990s drink via Amazon in 2014m and fans clamored for the drink so much that on the first day, the supplies available ran out. This was even though on Amazon, Surge was going for $14 for a 12-pack of 16-ounce cans, which is really amazing and shows the fan base that Surge really has all these years later.

In fact, it is this die-hard fan base that made Coke realize just how much money could be made if Surge was brought back to the store shelves. If you are not aware of Surge, then you should be immediately, because it really is the best drink on the planet if you love to feel like you are hopped up on about a pot of coffee. It is a citrus-flavored drink, kind of like Mountain Dew, but it tastes a little different, and there is definitely more of a kick in it than just with a regular sugary pop. There is a Surge website that shows the drink is now for sale in the Midwest, Upper Great Plains, some Eastern States, and in the South. The website, which is aptly www.surge.com also has a map available, which shows you where the independent resellers are throughout the nation, although most of these independent resellers are collectors’ stores rather than real grocery or retail stores. When Coca-Cola was asked to respond to this awesome news, they did not respond, so it’s unclear right now whether Surge is really back for good or whether it is just a limited-time offer.

When you look on the website, there is a statement about the expanded “SURGEcomeback, which is said to begin September 7, and a map with specific store locations and the independent resellers is continuously going to be updated as more states and locations get involved in the action. Some of the states already shown on the map include Florida, Ohio, Kentucky, Tennessee, Pennsylvania, Michigan, North Carolina, New York, and South Carolina. If you are thinking it has been a long time since Surge was on store shelves, that is true, becaue it was discontinued in 2000.

The die-hard fans started a The Surge Movement which attracted more than 200,000 “likes” on Facebook and it was started to urge Coke to bring back the crazy insanely good soda. In 2013, The Surge Movement raised $4,000 to buy a billboard near the headquarters of Coca-Cola in Atlanta, Georgia, which read “Dear Coke, we couldn’t buy Surge, so we bought this billboard instead.” Then in 2014, Amazon stocked Surge, but with the outrageous price, only the die-hard fans purchased the drink, although it did sell out which shows just how much people wanted this product back. It looks like at least for now, Surge is going to stay for a while, especially since Coke appears to be getting the popular drink nationwide, starting with the Midwest and Eastern areas, and then it will be moving out towards the West. If you are a fan of Surge but don’t live in any of these locations, then you can still get Surge online on Amazon if you have the Prime Pantry, although it is still in limited quantities.