The Tesla Motors Inc (NASDAQ:TSLA) Model X is less than four days away from its release and those who pre-ordered first will start getting their new SUV. The vehicles will start rolling out of the company’s Fremont, California factory on Tuesday.

Tesla will kick things off with an event at 7 p.m Pacific. The company won’t hold back on this one, they’ve been waiting to release an SUV for quite some time now. Tesla talked about SUVs even before the first Model S sedans were on the road.

Back in 2010, Tesla executives presented a slideshow for the models they were considering. There were four options: an SUV, a sedan, a van, and a cabriolet. The cabriolet and the van never became a reality but the SUV concept was an impressive one. Add the rising popularity of SUVs these last few years and you got yourself a recipe for success.

Tesla has not had it easy, the Model X is more than a year behind schedule and many of the people interested are getting tired of waiting. The investors don’t seem to mind though, the company’s shares are up 18 percent so far this year, even though there’s been a recent drop.

Not up to date on the Model X? Here are the four things you should know:

The Wait Is Not Over For Some

Buyers reserving a Model X right now will get their car early 2016, according to the electric car maker’s official website. Make sure you have $5000 on your pocket to reserve the car. If you don’t have enough, you can reserve a Model S for half of that.

The wait has been long for those who first pre-ordered the car back in 2012. Think the $5000 deposit is a lot? Those who pre-ordered the Signature Model X version had to put down eight times that amount, so $40,000. 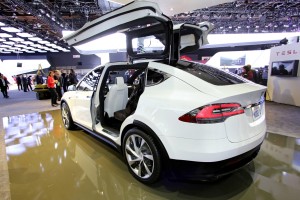 Tesla has not revealed the price for the regular Model X but the Signature version is said to cost at least $132,000. Want more add-ons and accesories? That’s $12,000 more, so if you want the most impressive Model X, you’ll spend around $144,000.

Back in August, Musk called the seats in the Model X a work of art. He added that they were harder to figure out than the falcon wings, which have been around since the car was first revealed. Musk finished by saying that the Model X is maybe the hardest car in the world to build.

The Model X is part of Tesla’s goal to provide attractive and fast electric cars. But that’s just the start, Tesla’s ultimate goal is to produce an electric car for the population and to reach production of half a million cars in five years.

Tesla plans to roll out its Model 3 in two or three years. This model will come with a $35,000 price tag.