Just a few weeks ago, the three Top Gear hosts were the top candidates for every streaming service out there. The interest was real after it was announced that BBC would not bring back Jeremy Clarkson after years of hosting Top Gear. The controversial host was said to be on thin ice when he got into a fight with a producer of the show. According to BBC, the argument started over a steak.

Clarkson was suspended and then told he would not be back, Hammond and May soon followed. The three were available to host a car show outside of the UK and everyone knew they would be back together at some point. A few weeks went by and the three were pretty much linked to the biggest streaming services out there. Amazon.com, Inc. (NASDAQ:AMZN) then shocked the world with an offer to the three and a producer. At the time, one of the most interested was said to be Netflix, Inc. (NASDAQ:NFLX). After the deal was done, many sources revealed that they were really close to an agreement. Weeks have gone by since the signings and now Netflix is revealing why they backed off. 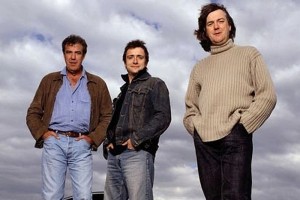 Many would think coming to an agreement with the three, who had one of the biggest shows on television at the time of the incident, was a top priority. Not to Netflix, the popular streaming service was not convinced about all the hype for a new show and its executives don’t think the money the Internet based retailer gave to the hosts and part of the team was worth it. Amazon spent $250 million for three seasons, each with 12 episodes.

Netflix’s Chief Product Officer Neil Hunt spoke to DigitalSpy about the deal. According to him, the streaming service has past Top Gear episodes and have a clear idea on what its users like. He added that the service makes decisions on its data and that the signing wasn’t worth the money. He finished off by saying that the three hosts sold themselves for way more money than they are worth.

His words made it seem like the company is firing shots at its competitor, but is he right? If Netflix is not getting enough audience for its old Top Gear episodes, why would they throw more than $250 million for a new show. I mean, the new one isn’t even going to be part of the Top Gear brand. But who knows, we’ll just have to wait and see if this was the right decision.

Hunt believes Amazon made a mistake by throwing that much money for a new car show and isn’t worried that the Internet based retailer has the money to make those kinds of moves. He ended up saying that Netflix is much bigger and has bigger checks to write. Woah.

No one knows when the new show is coming out but it is clear that Netflix executives won’t be tuning in. Top Gear will still be around too, BBC is planning on a comeback for next year, this time with a new roster.

What do you think about the signings? Are you a fan of Top Gear? Will you tune in for Amazon’s car show? Let us know in the comments.