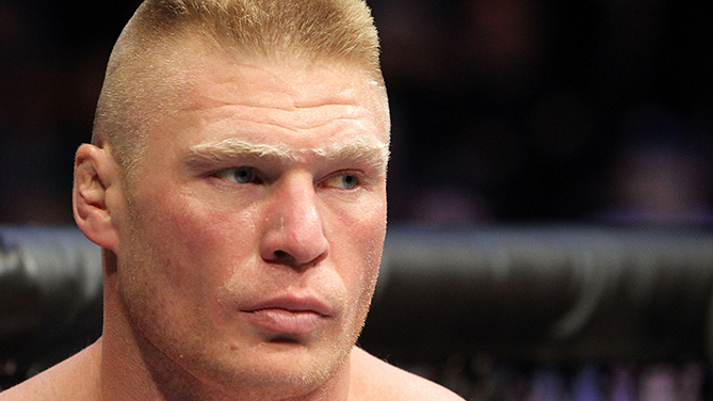 Brock Lesnar’s mixed martial arts career lasted around five years, but in that time, he became the UFC Heavyweight Champion and a pay-per-view attraction.

Lesnar got into mixed martial arts in 2006 and quickly made an impact, beating his opponent in 1:09 for his first ever win in MMA. Two years later, Lesnar joined UFC and made his debut at UFC 81: Breaking Point against former UFC Heavyweight Champion, Frank Mir. Lesnar lost that match but made an impact months later when he beat Couture via a technical knockout (TKO) in the second round to become the new UFC Heavyweight Champion.

But after two straight losses and a long battle with diverticulitis, Lesnar decided it was time to step away from the octagon. The disease, which occurs within the large intestine or colon, was the main reason that Lesnar decided to retire.

In 2011, the disease caused Lesnar to have a 12 inch piece of his colon removed. He was never the same again and thought it was best to move to wrestling once again.

Lesnar appeared two days ago on the Stone Cold Steve Austin podcast and revealed more on the long fight with the disease. Lesnar told Austin that it was unfair for him and that he would still be banging heads had he not gotten sick.

Stone Cold then asked Lesnar if fans ever got to see him completely healthy, to which he replied, that they did during the match against Couture but got worse as time went on. He added that he would try to get through training camp but knew something was wrong.

Diverticulitis had taken a lot from Lesnar by the time he found out. The former UFC Heavyweight Champion had already gone through numerous training camps, big matches and surgeries.

Lesnar decided to step away from UFC and many weren’t surprised by his decision to come back to wrestling. He quickly became the champion and the main attraction once again, feuding with John Cena and whoever came his way.

But he thought about coming back earlier this year, when his contract was expiring. Rumors had him coming back to UFC and he felt healthy and motivated to compete once again. Lesnar said this wasn’t a bluff and that he seriously considered a return. He added that he felt robbed by the disease and it took him two years to start feeling good again.

Lesnar had UFC fans excited and even trained to see where he was at. But he ended all the rumors after announcing on ESPN that he would stay in wrestling for a while. The Beast, as he is known in the wrestling business, will soon face The Undertaker to end their long feud, which started two years ago when he broke his undefeated streak at Wrestlemania.

Would Lesnar make an impact if he came back to UFC? Is he better as a wrestler or mixed martial arts fighter? Let us know in the comments.