Microsoft Corporation (NASDAQ:MSFT) recently held an event to unveil some of its products and it stunned the crowd with a new Surface Pro tablet, Surface Book and even a Lumia phone.

Fans had been waiting for the Surface Pro 4 for quite some time and the company did not disappoint when it finally revealed it October 6.

The device comes with many improvements over its predecessor, the Surface Pro 3. But is that enough to upgrade?

Surface Pro 3 owners are definitely asking this question and while some may be happy with the third generation of the tablet, the new device is packed with impressive features that may just convince you to upgrade.

The two are similar when it comes to design, the only difference is that the Surface Pro 4 is thinner and lighter this time around. The newer model also offers a larger display, but not because its bigger, but because the company reduced the area outside of the screen.

The Surface Pro 4 now brings Intel Corporation (NASDAQ:INTC)  6th generation processor with the Core M, i5 and i7 configurations, which depend on the version you buy.

The Surface Pro 4 now comes with 16GB of RAM, depending on the version, and can be configured to up to 1TB of storage.

The device is also arriving with Windows Hello, a biometric authentication feature that provides you instant access to your Windows 10 devices. All you have to do is show your face or use your fingerprint to login.

The first part was for the Surface Pro 3 owners wondering if they should upgrade. Now, this part is for those who are looking to get one of these devices but are overwhelmed by the many options out there.

Let’s compare it to another device that was also announced recently, the iPad Pro.

The Surface Pro, which the company says is a solid replacement for a laptop, is a powerful device running a full desktop OS that can easily run full Windows programs.

The Surface Pro 4 comes with the latest operating system (Windows 10), and a bunch of improvements that make it stand out from the other tablets in the market. 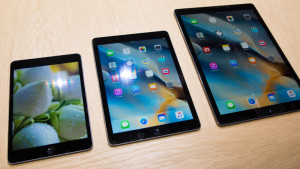 Its competitor, the iPad Pro, runs iOS 9 but it can’t match what the Surface Pro is offering because the OS is designed to run mobile apps with limited functionality.

But the biggest disadvantage for the iPad Pro might be in the ports, featuring just a lightning connector. The Surface Pro 4 offers a microSD slot, USB 3.0 port and a docking station.

The Surface Pro 4 and iPad Pro come with a pen and keyboard. Microsoft’s pen is said to last one year before running out of battery and is packed with features such as the ability to erase as if you were using a real eraser on a pencil. The iPad Pro’s pen lasts just 12 hours and does not offer much features.

Microsoft’s tablet also comes with a glass trackpad, which is not on the iPad Pro.

The Surface Pro 4, which starts at $899 and goes up to $2,199, is available for pre-order now and will hit stores October 26. The iPad Pro is coming next month.

Are you buying a Surface Pro 4 or an iPad Pro? Let us know in the comments.