World Wrestling Entertainment, Inc. (NYSE:WWE) 2K16 is almost here and it promises to be the best game in the series, with tons of new characters and improvements. The game will be out in less than a week and WWE is now revealing more about its upcoming title. In the newest game of the series, exclusive match types and online gameplay have been improved.

Cheat Code Central, who just checked out the game for the first time, revealed some of the most important aspects about WWE’s upcoming title, including the match types in the game. They said there are plenty to choose from, including the normal tag, tornado tag, six-man, triple threat, fatal 4 way, handicap, iron man, pinfalls count anywhere, submission, no holds barred, tables, extreme rules, ladder, tables ladders and chairs, steel cage, hell in a cell and last man standing.

The game will allow you to create more characters this time around, adding 100 slots. In past titles, players had only 25 slots, which limited them when it came to creating their own characters or the ones that were missing in the game. 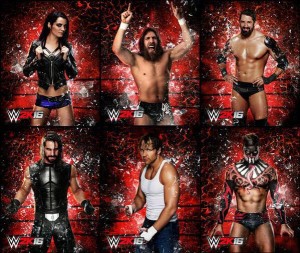 WWE announced a few months ago that this year’s title has over 120 playable characters, including legends and NXT members. The game will also bring Terminator to the roster for the first time but that’s if you pre-order now. WWE has been advertising the movie for quite some time and even had Triple H in a Terminator-like entrance in this year’s Wrestlemania.

For those who love to play online, there is also great news. This year’s online gameplay is said to be way better than 2K15, which had big issues early on. MyCareer Mode, a fan favorite, has also been improved and takes you from NXT all the way to a legend. Watch out though, The Authority will be featured in this mode and you will have the chance to support or defy them, you know what happens to those who choose the second option.

It was also recently reported that there are some customization options for each created character’s face. Male characters will have 105 hairstyles, 10 marks/scars, 12 eyebrows, 80 facial hair options, 9 kinds of makeup and four lipsticks. For the female characters, there are 35 hairstyles, 45 piercings, 6 eyelashes, 6 lipsticks and 15 eyeshadows. Remember, the customization for males and females is separate, so the options available for one cannot be used on the other.

Are you getting WWE 2K16? What are you most excited about? Let us know in the comments.