When you think of the best place to get sporting goods, Dick’s is at the top of the list, especially on Black Friday when they have some amazing deals and special offers. Dick’s is the premiere sporting goods store whether you are looking for new athletic gear, shoes, shoe inserts, or sporting products such as hockey sticks or volleyballs. Dick’s Sporting Goods is also a great place to go for Black Friday 2015 because they have such a selection in products, meaning you can find clothing, shoes, guns, ammo, jackets, coats, and so much more.

These are just some of the hottest deals that Dick’s Sporting Goods has to offer for Black Friday 2015, which is both online and in-store. You will find a ton of deals on shoes and clothing items for both Men and Women as well as Youth, some of which are not matched anywhere else in terms of discounts. You will also find some hot deals on jackets and coats, which you cannot save more by going anywhere else. If you need some new winter items or sporting items, look no further than Dick’s Sporting Goods this Black Friday. 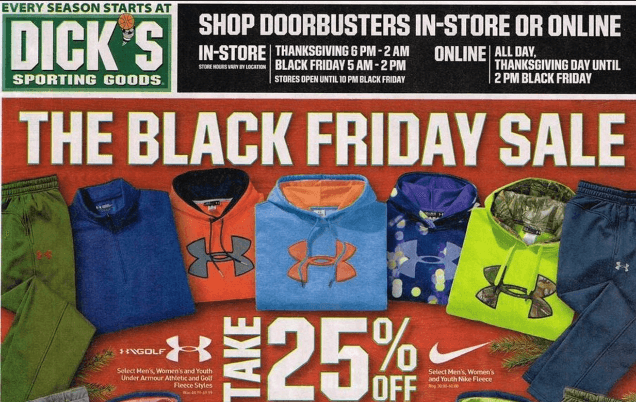