The 2015 Black Friday ad for Disney Store was just leaked online, which shows a variety of deals and special offers for you this year. Whether you are looking for toys, clothing or other items from Disney characters, you will find them all at the Disney Store. The Disney Store 2015 Black Friday deals are going to be online as well as in-store, so you can take advantage of the deals over the Internet regardless of whether there is a Disney Store location near you.

While there are plenty of Black Friday deals going down at the Disney Store in 2015, we wanted to give you just a small preview of these deals so you can see what all they have to offer. If you would like to see the full ad, then you can click on the bottom of the page to see the ad scan.

These are just some of the special savings and deals going on at the Disney Store for 2015 Black Friday and there are many other great deals to be had both in-store and online. If you like the old school Disney characters, such as Mickey Mouse or Pluto or if you like the newer Disney characters such as the “Frozen” characters like Elsa, the Disney Store offers you a variety of characters and items. If you shop online, you can get another 20% off by just typing in the special code “THANKS” at the end during checkout, which makes the deals even that much better online.

If you would like to see the full 2015 Black Friday ad scan for the Disney Store, simply click on the ad image below to bring it up. 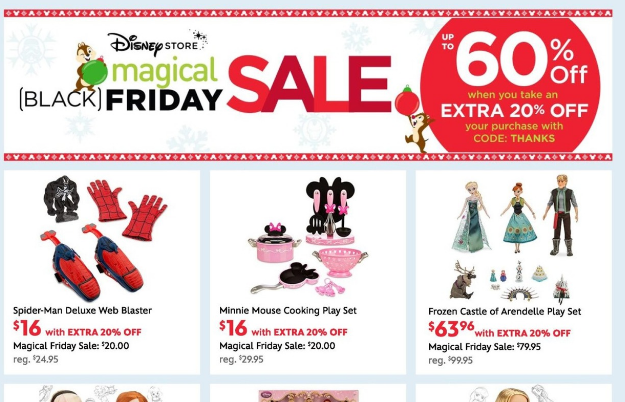