Dual Monitors Vs UltraWide Monitors – Which is Better? 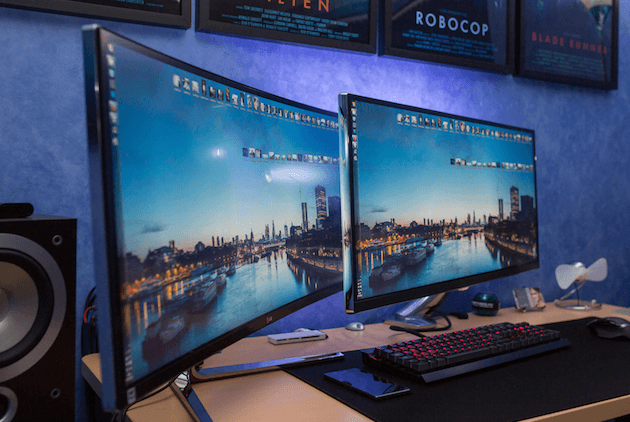 Multiple Monitors or Ultrawide Monitors – What is the right choice for you?

The ultrawide monitor is the latest monitor permutation to arrive on the market. Previously, users added real estate to their display by attaching two or more monitors together to give the illusion of one wide monitor. Once a rarity, an increasing number of manufactures are offering ultrawide monitors and marketing them as superior options in terms of improving productivity, enjoying films, and playing video games. This article will compare and contrast the various benefits and drawbacks of owning and operating an ultrawide monitor, as well as its performance relative to utilizing multiple monitors.

What is an “Ultrawide” Monitor Technically?

Generally speaking, “ultrawide” is a term companies use to describe monitors that have a 21:9 aspect ratio. In fact, 21:9 is itself merely a marketing term to describe what is actually a 64:27 aspect ratio. 64:27 is the natural follow up to 16:9 and 4:3 aspect ratios. 21:9 is an approximation of 64:27 and it works great as a marketing tool to emphasize that ultrawide monitors are longer than 16:9 monitors, also they give a sense of continuity much like the how Apple precedes all of its mobile device names with “I”. Although technically incorrect, since 21: 9 is how it’s commonly referenced, that’s the terminology we will be using throughout this article. Hopefully you’re still with us after that explanation… 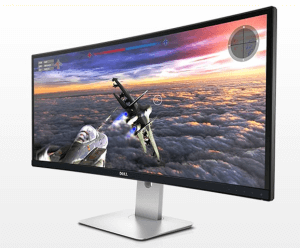 Anyways 21:9 displays are the same ratio as theater screens, they usually display 2560p or 3440p by 1080p or 1440p. That said there are rumors are that several companies are currently developing 5k displays as well. Diagonally they usually run 29” to 34”. Dell, LG, AoC, and ASUS dominate the ultrawide market.

The 16:9 aspect ratio is the most common aspect ratio since 2009, it’s the international standard format for DVDs, HDTV, full HDTV, and HD Digital TV. However, Blu-Ray is intended for viewing on 21:9

In terms of productivity, ultrawide monitors allow seamless viewing real estate for several maximized windows without the interference of the bezels that plague multiple monitor systems. Curved ultrawide TVs allow for images to be centered in your field of view regardless of where you’re looking, much more so than multiple panels. Practically speaking you only have to deal with one set of cables and wires, thus freeing up your desk space.

For some the bezel isn’t a nuisance but rather a convenient organizer, keeping things separate, snapping their windows into place, etc. For these people they’re not trying to simulate one long screen but they just need more space to operate. Although you could download a third party desktop organizer, and you could even go so far as to simulate a multi monitor setup on your ultrawide, the easier option would be to get a multi monitor setup. Also, if you’re primarily working with spreadsheets or large data files, going wider will not necessarily help you make more sense of that information. Most content on the web is designed vertically, so it makes no sense to purchase an ultrawide monitor for that purpose either.

For viewing media there’s the obvious advantage of being able to watch films at their intended aspect ratio, although many made for television programs are created at the 16:9 aspect ratio, almost all films are created to be viewed at the 21:9 aspect ratio on large movie cinema screens. As you’ve probably noticed, most films on standard 16:9 screens have black bars above and below to compensate for the distortion that would normally occur. For film lovers ultrawide screens are the only true third option to watching a film at the movies or on a home projector.

Gaming with an Ultrawide Monitor

For gaming the situation isn’t as clear cut. An obvious benefit of ultrawide screens is that you won’t have to 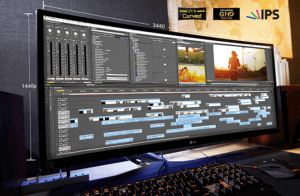 invest in multiple graphics cards, processing chips, etc. The problem is most games aren’t built for ultrawide screens, when you start playing it automatically adjust as if it’s on a 16:9 aspect ratio and the extra space on the sides gets blacked out. Needless to say it’s not the most aesthetically pleasing set up. Luckily there are several games which have jumped on the ultrawide bandwagon, and you could always compromise quality by hacking and distorting the video rendering, still it’s not enough to justify buying an ultrawide monitor for that purpose alone. Also you’re using 30% more energy and getting no added benefit.

The cost effectiveness of ultrawide monitors

The final metric to be measured here is cost effectiveness. Ultrawide monitors are still novelty products, and as such, they are still quite expensive. What you pay to acquire one ultrawide could buy you several 16:9 monitors. Could a cost benefit analysis determine whether or not the convenience of an ultrawide monitor makes up for the extra cost? Perhaps, but unlikely.

So which is better – Mulitple monitors or Ultrawide monitors?

The thing is, content still drives the market when it comes to monitors, currently there just aren’t that many options when it comes to 21:9. We saw the same thing when 16:9 monitors came out however, over time it became the standard, and perhaps 21:9 will become the standard at some point in the future and the costs will go down and more content will be created for it, until then it’s tough to compare it to more well established products.

What is clear is that for some tasks like consuming media the ultrawide is likely the best option, where as for other tasks multiple monitors are better. If you’re making a choice it really depends on what you’re using the monitors for, your personal preferences, whether you have them in the home or the office, and many other factors.