Jeremy Clarkson’s Show On Amazon.com, Inc. (NASDAQ:AMZN) Will Be In 4K, May Talks About Rivalry 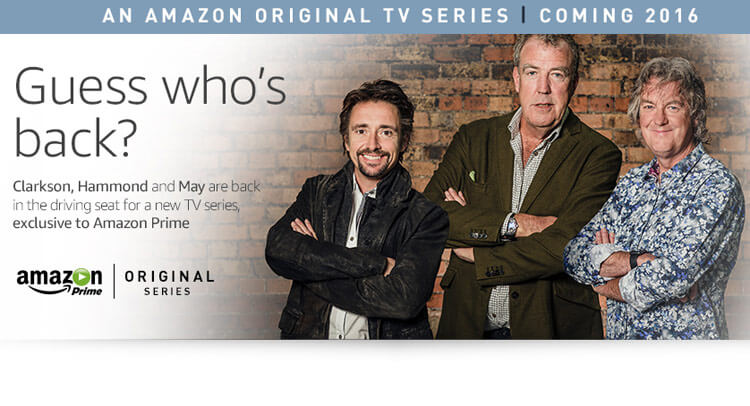 Earlier this year, Jeremy Clarkson, Richard Hammond, and James May signed a huge deal with Amazon.com, Inc. (NASDAQ:AMZN). The decision was a little surprising since there were other streaming services out there looking to sign the three hosts. But the Internet based retailer made the best offer and will now be delivering a show similar to Top Gear. The retailer has put in a lot of money to make the show a hit and is scheduled to debut next year.

Little is known about the show but it looks like it was filmed in 4K, which is good news for those who plan on watching it on their 4K TVs. A report from The Week said that broadcasting in 4K will mark a shift for the three hosts, who began filming Top Gear in high definition eight years ago.

It has been months since the BBC decided to let go of the three hosts and they will soon bring back Top Gear with a new presenter. The popular show will compete with the retailer’s new series, which started filming a few weeks ago. One of the hosts, James May, thinks it is very good for the new show to have a credible rival in Top Gear, which was one of the most popular shows around the world when Clarkson was suspended.

May, who signed the $250 million deal with Clarkson and Hammond to join Amazon, explained how this could be good for the shows. He appeared in a morning show recently and said that the really interesting thing about it is that it is going to be very healthy to have two big international car programs. The three are currently doing the Top Gear Live Tour.

May told the morning show that it shouldn’t be called the last one ever because they don’t know, he said that it is the end of the tour but just the end of seven years of fairly constant touring. He added that they’ve been to 32 countries and played to 2.2 million people around the world and that it is not the end of the whole thing.

Clarkson was suspended and then told by the company that they would not renew his contract after an altercation with one of the show’s producers. May and Hammond then followed and now the three are back for a new show. May said the new show does not have a name yet and that it will debut in the autumn of 2016.

May says they’ve discussed the names and it is very difficult to come up with one that hasn’t been taken. In October, fans found out that filming had started because Clarkson tweeted a photo of the cars and teams.

Top Gear and Amazon’s show will debut next year.