If you are looking for clothing, shoes, fragrances, and home items then you probably know that Macy’s is one of the best places you can go to get all of these items in one location. There are always special offers, bargains, deals, and other discounts going on at Macy’s which means you are more likely to get a better deal over at Macy’s than you are other big retail stores. When it comes to Black Friday, there are a ton of deals at Macy’s every year, and for 2015, the Black Friday deals are in abundance.

The Black Friday ad for Macy’s was released online and it shows many different sales, from apparel to shoes, home and garden items, to kitchen items and even toys. The best part about going to Macy’s on Black Friday is that there are several store locations throughout the country so you are sure to find a location near you. For Black Friday 2015, Macy’s will be opening up on Thanksgiving at 6 pm, which means you can get started early on your Black Friday shopping, and can also shop online during this time as well if you do not want to get out in the traffic.

We will be showing you some of the best Black Friday deals going on at Macy’s this year, but if you want to see all of the deals, you will need to click on the ad scan at the bottom of the page to see the full ad. A lot of these deals are clothing items, but there are also other items included as well, such as kitchen items, and there are even more items that we just do not have the time to show you as the Macy’s ad is significant in size and there are just too many awesome deals to name them all here.

No matter if you are looking for new bedding items for your home, new clothing for the kids, or some new clothing for you or your spouse, you are sure to find all of it at Macy’s this year during the Black Friday sale. You are likely to not see these low prices anywhere else, especially on apparel and clothing items, so it is best to shop at Macy’s since you know you are getting high quality products at the lowest prices possible.

If you would like to see the full 2015 Macy’s Black Friday ad, then click the image below to get to the complete ad scan. 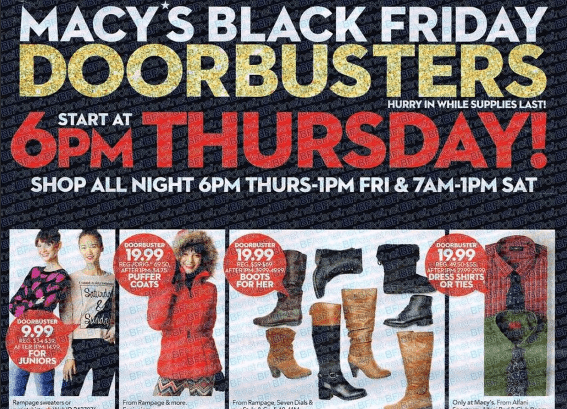