There are a ton of retail stores out there to choose from when it comes to 2015 Black Friday sales and deals, but one of the best retail stores to go to is Shopko. If you have never heard of Shopko, it is based out of Wisconsin near Green Bay, and there are several different locations of Shopko throughout the country. Shopko might be known for carrying many items, but electronics and toys are actually two of the top types of products you will find at Shopko.

In terms of Black Friday 2015, Shopko is really one of the best places to go since you will find over 850 different doorbusters and sales which is quite amazing. For 2015 Black Friday, the sales actually will kick off at 4 pm on Thursday, which is Thanksgiving Day, and then run until 12 pm on Friday. There will be more Black Friday sales throughout the weekend, but some of the best Shopko deals will only be going on from Thursday evening until Friday afternoon. If you want to get an even earlier start on your Black Friday shopping, you can begin shopping on the Shopko website on Wednesday, which is actually a pretty cool deal since you will not need to shop on Thanksgiving if you do not want to.

These are just some of the best deals going on at Shopko during 2015 Black Friday, with many more sales, discounts, and special offers available for you in the store beginning Thanksgiving day at 4 pm. If you are looking for some good electronics, there are many to be had at Shopko because this is one of the best stores to find your favorite brands and products at very low prices.

In terms of Shopko, it is one of the best places you can shop on Black Friday because there are literally hundreds of different items to choose from in a variety of departments, whether you are looking for jewelry, cosmetics, clothing, electronics, and almost anything else you can think of. Instead of going to many different stores to get your products, head over to Shopko and get everything you want in one place.

If you would like to see the complete 56-page 2015 Black Friday ad for Shopko, simply click on the image below to get the full ad scan. 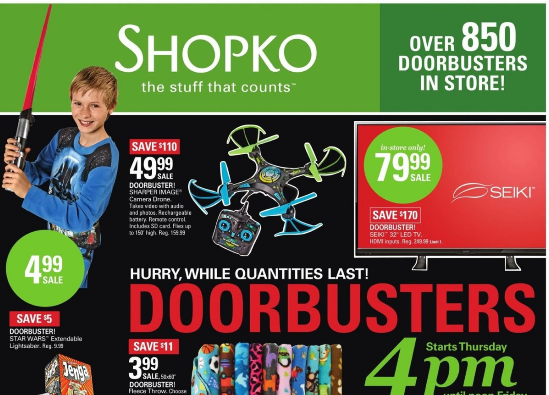