One of the most common places where people go when it comes to Black Friday is Target, because Target is known to have some of the best deals around. In terms of what Target has to offer for Black Friday 2015, you can find anything from electronic devices to clothing, food and jewelry, home improvement and home accessories, to baby items and food deals. Target is literally the one-stop shop for all of your needs in 2015 no matter what you are looking for, and Target is known for having great discounts, and special offers.

The 2015 Black Friday ad for Target was just released and you will find so many great deals that you will probably not want to go anywhere else on Black Friday, and most of these deals also can be found online if you cannot make it out into the store on Black Friday. The doors also open on 6 pm on Thanksgiving night, so you can find even better deals and sales if you go out on Thanksgiving night as opposed to Black Friday morning. If you do go other places, you will definitely want to check out Target first, as their deals on electronics, gaming consoles and games, clothing, and nearly everything in between are cheaper than just about anywhere else that you can go.

We are going to show you a preview of what the Black Friday 2015 Target ad looks like, but if you want to see all of the deals, you can click the image at the bottom of the page, which will bring up the full 40-page ad scan.

With all of these deals shown above, which was just a small preview of deals, you are sure to find what you are looking for on Black Friday this year by just going to Target. One of the best things about Target is that there are so many deals both online and in-store that you will find discounts and doorbuster deals that cannot be competed with by any other retail store. You will find that their electronics deals and discounts, including on movies, gaming consoles, computers, tablets, and games are some of the best around.

If you would like to see the complete 40-page Target ad for 2015 Black Friday deals, then click the image below which will bring up the full ad-scan. 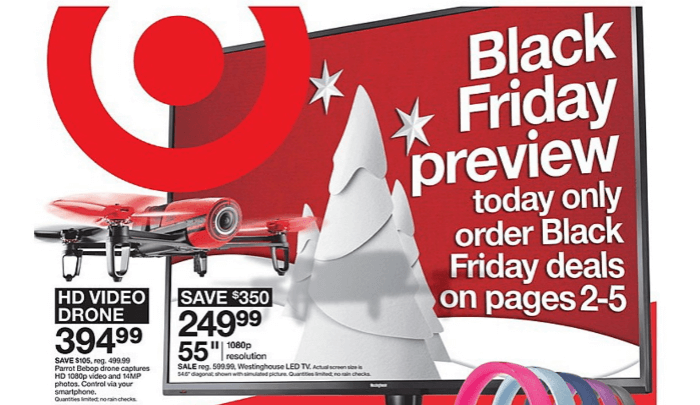