There are not many stores quite like Victoria’s Secret, which is one of the top places for women to go if they are looking for nightgowns, pajamas, various varieties of underwear, fragrances, and everything else that could be considered part of the women’s intimate collection. Victoria’s Secret is known for having a lot of special offers, discounts, and deals throughout the year, but during Black Friday these deals are always better and bigger.

The 2015 Black Friday ad for Victoria’s Secret was just leaked online, which shows some really good deals on some of the top outerwear and intimates that women want this year at very low prices. Whether you are looking for a new sexy outfit for your special someone or you just want some new bras and panties, Victoria’s Secret has you covered on Black Friday.

We are going to show you just a preview of what some of these great 2015 Black Friday deals are for Victoria’s Secret, with a lot of the deals being both online and in-store. This year Black Friday actually begins on Thursday, which is Thanksgiving, so you will be able to begin your holiday shopping a day early this year. Even though we will be showing you a small snippet of all of the amazing deals at Victoria’s Secret during Black Friday, it is not all of the deals, and to get all of the deals you will need to click on the image at the bottom of the page to bring up the full ad scan.

These are just a few of the amazing deals that will be going on during the 2015 Black Friday sales at Victoria’s Secret. When it comes to bras, panties, nightgowns, lacy and sexy lingerie and so much more, there is no match for Victoria’s Secret as the price and quality often cannot be beaten or replicated. You will be able to look online to find a Victoria’s Secret location near you, which should not be that hard since there are many different locations spread throughout the United States. If you still cannot find a location, no worries as these deals are all available online as well, except the few in-store only offers.

If you would like to see the complete Victoria’s Secret Black Friday ad for 2015, simply click on the image below to bring up the full circular. 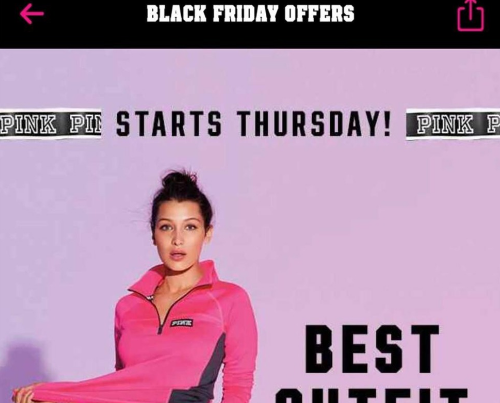