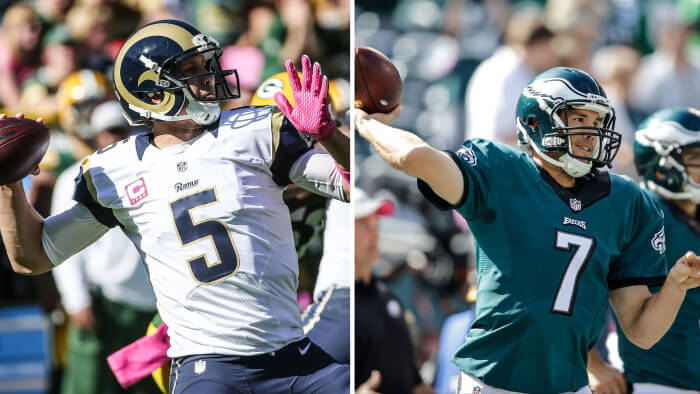 The Eagles and Rams swapped quarterbacks back in March and the move looked good for both teams. The two quarterbacks would play with new teams, one with an improved offense and the other with a promising defense. But we’re now ten weeks into the regular season and it seems like neither team won this one.

Nick Foles was benched after nine games and now his contract situation looks a little complicated for the Rams. The former Eagles quarterback was replaced by Case Keenum. The trade was a bit stunning when it was first announced because Foles had great numbers as the starting quarterback for the Eagles, especially in his first season, where he threw 27 touchdowns and only 2 interceptions. The numbers are currently the best TD-INT ratio in a single season.

Foles had great games under Chip Kelly’s offense and many Eagles fans thought he would be the teams quarterback for years.

Bradford, a former number one pick, also had good games but injuries made him miss a lot of them. But even with that, many consider him a solid quarterback.

After the trade, the Rams decided to give Foles a new three year contract worth $24.5 million. His old deal had one year remaining and would have paid him just $1.5 million for the season. The Rams will now have to pay Foles $6 million this season and that is not even the worst part about his contract. His $1.75 million salary and $6 million roster bonus for next season are guaranteed, so even if the team decides to release the quarterback, they would have to pay him the millions.

The Rams did receive a second round pick from the Eagles and also exchanged a few other picks. That is part of the good news of this not so good deal. The other part is that if the Rams decide to release Foles, they will have to pay the millions mentioned above, but the move will save them $5 million in cap space for next season.

No one knows if the Rams are planning on starting Foles if things go bad with his replacement, but if he doesn’t and gets released after the season, this means the team gave up Bradford and paid Foles nearly $14 million to start nine games for them.

Bradford has been decent in some games with the Eagles but has not really impressed. He wasn’t benched like Foles, but won’t be starting after suffering two injuries against the Dolphins.

The Rams and Eagles are currently 4-5 and still fighting for a playoff spot by winning the division. The deal is not even close to being the worst of all time but has not helped the two teams.

What do you think about this trade? Will Foles be back with the Rams next season? Let us know in the comments.