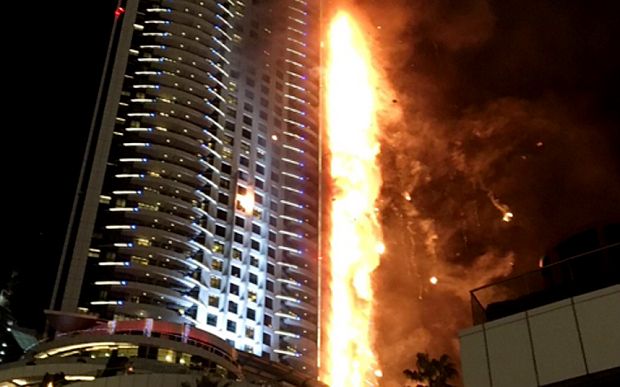 A fire burned part of a 63 story skyscraper in Dubai earlier today, but with residents safely out of the building and only 14 minor injuries reported, authorities decided to let the fireworks display go on at the world’s tallest building, which is located a few hundred meters away from the skyscraper.

Fire quickly burned part of the luxury Address Downtown Dubai Hotel, which is close to the Burj Khalifa tower. People gathered to watch the fireworks display at the world’s tallest building but were also paying attention to the fire next to it.

Pictures and videos showed debris falling from the hotel as authorities evacuated those staying there. Many had to run as the fire quickly spread. People in buildings nearby waited for the fireworks display and many staying a few miles away thought this was part of the celebration. They quickly learned that it was not fireworks and that the 63 story building was on fire.

People still gathered to watch the fireworks display while the building continued to burn. The Burj Khalifa impressed the crowd with a beautiful display. Things were different on the other side, the skyscraper continued to burn and flames sent smoke to the world’s tallest building. When midnight struck, many news channels had the display on one side and the fire on the other. Viewers were entertained by the fireworks going off outside the tower and areas nearby, but authorities watched the fire closely as debris kept falling.

The Dubai government’s media office said 90 percent of the fire had been contained and that all residents of the hotel were evacuated, 14 of them suffered minor injuries. Reports said the fire started on the 20th floor.

One resident told Britain’s Sky News that the alarms went off when the building was properly on fire. He added that the situation was chaotic when people inside found out that the building was on fire. Four fire brigade teams were on the site but the fire quickly spread and could not be contained right away.

The fireworks display went on for minutes as the crowd recorded and took pictures of the two skyscrapers. The Address Downtown Hotel is the 19th tallest building in Dubai. The hotel was completed in 2008 and has 626 apartments and 196 rooms. The building was the 6th tallest in Dubai at the time of completion. According to CNN, the fire was caused by a burning curtain.